In the latest episode of Kumkum Bhagya, we see that all about Abhi missed knowing Pragya and Kiara’s connection. With the start of this episode with Abhi calling to Tanu and says you asked me to give you the responsibility of the home, but Abhi says that I did not trust you and you have promised that you will take care of anyone. Tanu asks for a change to Abhi and she also gets apologizes.

Abhi tells that he was talking to Disha Walia and says you shall get the titles retouch. Tanu thinks that he did not talk to Purab’s Disha. Abhi asks if she is waiting for elders to omission. Tanu thinks that if Abhi comes to know that I made Kiara fell that what he will do. She thinks for doing something to Disha. Abhi listens to Kiara talks and she tells that her Mamma was getting very angry and will slap him. Abhi says I can not hear you. He asks what are you saying? Abhi asks this question in a very shocking way. Kiara asks to him to relax and says my mamma will take you to the hospital as she is upset with you for not coming to drop me at home.

Pragya comes there very fastly and importunes to talk to him. To talk to him very nicely Kiara asks her. Pragya thanks to Abhi for helping Kiara, but he could not her. I could not hear you say Abhi. Kiara takes the call. Abhi could hear you now. Kiara says I love you and says my mamma also loves you a lot. Abhi says I love you 2, Abhi says this words with very sad voice and start crying. Pragya asks her to call Superman home. Abhi thinks he feels as talking to Pragya when he talks to Kiara. Abhi thinks that he has started loving Kiara and speculate her face in her. Naina song plays…… He covers himself with the blanket and rests on the bed, after this, he feels so tired. 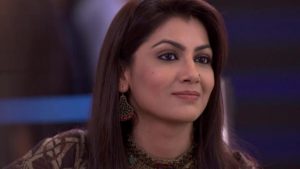 Aaliya asks Tanu what happened? I did a mistake Tanu says. Aaliya asks her to tell something new. Tanu says that she takes revenge on Kiara. Aaliya asks her to tell straight without any trouble. Tanu tells her everything. Aaliya said that you have to cross every limit of stupidity. Aaliya says Disha is doubtful on you and can make troubles for us. Tanu asks why are you afraid of her. Aaliya says that Tanu is trying to be same as Pragya and is handling home. She says Abhi Bhai is very possessive of them and he was ready to leave the house. She asks Tanu to keep a distance from Disha for some time and says then we will take retaliation on her later. She asks her to make herself in Disha’s good books. Tanu blessed her. Aaliya thinks she will be attached to Disha when she comes closer to her.

Dasi asks Robbin to prepare Disha and Purab favorite food as today is their marriage anniversary. Tanu listens to them and says that day is special for her. She cames closer to Dasi and hugs her very tightly. She was surprised to hear the Dasi idea and also very impressed for her and she again gave a tight hug. Dasi is surprised for seeing this nature of Tanya.

king tells Pragya that he has nobody in his life other than Pragya and Kiara. Pragya asked what will you do without us. Kings asks did you find anyone and says Abhishek Prem Mehra. Pragya looks surprised.