A Ukrainian soldier sacrificed his life for the nation after he blew himself up along with a bridge in Crimea. Yes, a brave soldier from Ukrain is being remembered by the world as a hero after he made a sacrifice to stop the Russian army from advancing. 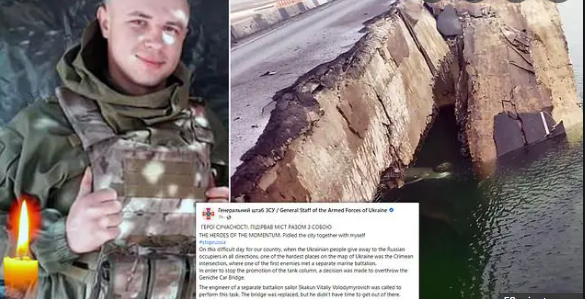 The hero was known as Vitali Shakun and will be remembered as a hero for the entire nation. He was the soldier from the marine unit who blew himself along with a bridge in Crimea to allow his battalion some more time to make a group once again against the incoming Russian troops.

Who Was Vitali Shakun?

According to the sources, the soldier sacrificed his life in Henichesk in the Kherson region, the port city where a woman from Ukrain went viral for her daring clash with soldiers from Russia. Many Ukrainian soldiers are being praised for their bravery and courage to face the Russian army.

Along with this, a group of thirteen soldiers was guarding the remote Snake Island yelled to the invading Russian Navy before they were killed in a vicious bout of the bombing. In the war of Russian and Ukrainian soldiers, many soldiers lost their life.

Currently, the situation of both countries has been worse than ever because of their war. According to the sources, the Ukrainian army sustained heavy casualties as they claimed to have killed more than 2800 Russian soldiers.

How Did Vitali Shakun Die?

With this, the Russian President is reportedly frustrated with the army of Ukraine overpowering the Russian army at places. Along with this, he also planned to unleash thermobaric weapons on the streets of Ukraine.

Vladimir Putin, Russian President appealed to the Ukrainian forces to lay down their arms and hand over their leaders. The hero or marine soldier Vitalik Shakun and his battalion were manning the Henichesk Bridge at the Crimean Intersection. As the forces of Russia advanced on the bridges, the soldier decided to blow up the bridge where the landmines were already lined. The soldier told his decision to his fellow troopers who later heard the explosion.

The story of his sacrifice was shared by the General Staff of the Armed Forces of Ukraine online. They wrote,” THE HEROES OF THE MOMENTUM. Pidled the city together with myself #stoprussia. On this difficult day for our country, when the Ukrainian people give away to the Russian occupiers in all directions, one of the hardest places on the map of Ukraine was the Crimean intersections, where one of the first enemies met a separate marine battalion”.