Watch: Trump ‘hits’ child On Head with Baseball video Viral on Social Media  Recently, Donald Trump come into the headlines in which he accidentally hit a child on the head with a baseball. The accident happened during the World Series game in Atlanta last week where Donald Trump also joined the stadium for the match. A video went viral on social media in which Trump accidentally hit a child on the head. This happened when some boys in which the child also included standing just below the balcony where Donald Trump standing. They demanded his autographs and constantly looking Donald Trump so that he sees them and give his autograph. 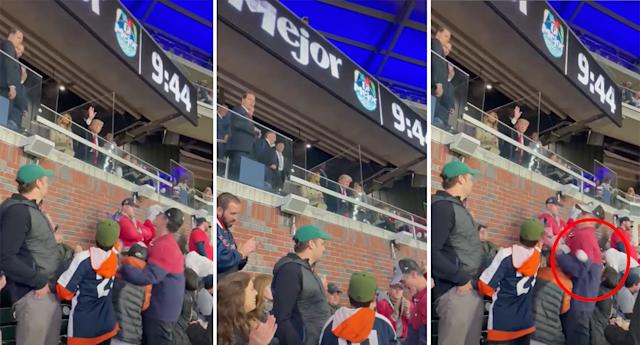 The video was a short clip of less than a minute but it garnered over 80,000 likes in a very short time. The video was first uploaded by user @loupastore27 on TikTok. The user captioned the video “I got Mr Trump’s autographs at the World Series”. According to reports, when fans initially asked the former president – who sat next to his wife Melania Trump while attending the Atlanta Braves beat the Houston Astros 7-0, for his autograph, he objected at first but then agreed. When he is just about to give an autograph, a small accident happened there in which the child get a hit from the baseball from the hands of Trump.

Talking about the video, Trump appears with his wife Melania Trump. Suddenly, a group of children come to get an autograph from him but he refused to give it. Later, he gets agreed and then he gives his autograph on the baseball to give them. When he gave a catch to the kid, he slightly missed it and the ball hit on the head of a kid standing behind. Now, it was actually quite interesting to see it in the video when some fans are eager to get the autograph, they get a hint from a baseball.

After the video went viral on social media, there are many users joined the conversation and talked about it. ONe Twitter user wrote, “Here’s Donald Trump, who totally could’ve gone pro at baseball like he said, nailing a kid in the head with a ball after signing it at the World Series”. Another Twitter user wrote in defence of Trump that “He showed the ball and threw it…. totally the receivers fault”. Now, the video went viral and many people talking about the incident that happened at the hands of Donald Trump.