A new web series “Raat Baki Hai” is set to be released on 16th April on Zee5. Paoli Dam is playing the lead character in the series opposite Rahul Dev. Anup Soni and Dipannita Sharma will also be seen in main characters. The web series has directed by Avinash Das and written by Sidharth Mishra. The shooting for the series was started in April 2020, but due to pandemic the makers postponed the shooting and now they are ready to release this thriller drama on Zee5. The makers have released the trailer which has been watched by many viewers and they are eagerly waiting for the release. Paoli Dam will be the lead actress in the series who got fame from the movie “Hate Story”. 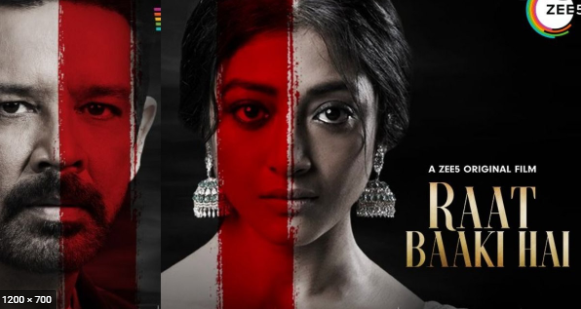 She has started her career with the Bengali TV serial Jibon Niye Khela, Tithir Atithi, and Sonar Harin. Then she worked in a Bengali movie Teem Yaari Katha in 2004 which was released in 2012. She was noticed in a Bengali fil Chatrak for her role and she also won the Best Actress award for her performance in Natoker Moto. The main lead actor Rahul Dev is a well-known actor who has worked in many Punjabi, Hindi, Telugu, and Tamil movies. He has made his acting debut in 2000 with the film “Champion” and he played the role of villain. He has mostly played the villain characters in several movies.

He has been a participant in the reality show Bigg Boss Season 10. He has won the Filmfare Award South for Best Villain in the movie “Simhardi”. The story of “Raat Baki Hai” is about a famous Bollywood actress found dead in Ranthambore Place hotel after her engagement with her long-time boyfriend Kartik Sharma who is a scriptwriter. Rajesh Ahlawat is a police superintendent who is in charge of this case. Ahlawat suspects Vanni’s fiance Kartik and investigates him regarding the murder. Ahlawat also inquiry from the common friends of a couple where he found the abusive behavior of Kartik with his fiancee Vani.

As time passes Ahlawat got some clues from various people that there may be many people behind Vaani’s murder. Kartik seeks help from a man Raja Sujjan Singh who is popular to help people. The ex-girlfriend of Kartik is the wife of Raja Sujjan Singh and she is also aware of the behavior of Kartik. Kartik seeks help from his ex-girlfriend (Vasuki) to prove himself innocent and tries to convenience her. Stay tuned on Zee5 to watch this web series. To know more about this article stay connected to us.