The super hit Telugu movie “Jaanu ” will be premiered on 18th April at 12:00 pm on SonyMax. The film was released on 7th February 2020 starring Sharwanand and Samantha Akkineni in the lead role. Jannu is an Indian Telugu Romantic movie which is directed by C.Prem Kumar and this is the remake of his Tamil film “96”. The movie has produced under the Sri Venkateswara Creations. The popular and successful actress Samantha Akkineni has seen in a female lead role. The actress has made a debut in Gautham Menon’s film “Ye Maaya Chesave” and she won the best debut actress award for this. She has won the Filmfare Award for Best Tamil Actress and Best Telugu Actress for movies “Neethaane En Ponvasantham” and Eega. 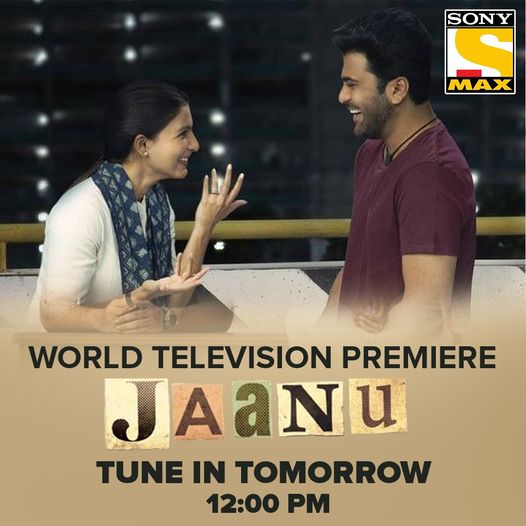 The story of the movie “Jaanu” is about a travel photographer Ram (Sharwanand) who visits his high school after a long time. His friends Murali (Vennela Kishore), Satish (Ramesh), and Subhashini (Saranya Pradeep) arrange a reunion with him. Murali wanted to tell Ram that Jaanu is also coming from Singapore. Jaanu and Ram were classmates and friends in the 10th class. Ram fell in love with her and expressed his feelings. They both decided to meet again after the vacation. Jaanu arrives at the school for a reunion and wanted to meet Ram. A flashback came to her mind when she was waiting for Ram in the 11th class but he didn’t come.

She came to know that Ram has left the school as his father was facing a financial crisis and he went to Hyderabad with his family. Jaanu is married in Singapore and Ram is single yet. She went on a long drive with Ram and tells him the reason for marrying someone. Ram asks her why she refused to meet him when he came to her college. Jaanu is shocked to know as no one told her about it. He says that he thought that she doesn’t want to see him so he decided to leave. Both were heartbroken after knowing about it.

Ram says her that he has seen her in the bride outfit at the wedding but couldn’t face her. Jaanu says that she waited for him until the last minute. Then they decide to spend the last few hours happily. They go to a restaurant where Ram meets his student who assumes that Jaanu is Ram’s wife. She requests them to share their love story. Jaanu narrates a story that she always wanted to live with Ram. She shared that how she met him for the first time and how they married in the end. Suddenly rain started and Ram asks her to stay at his apartment for some time.

Jaanu is concerned about Ram that he still loves her and he has everything that they gifted each other in school time. She asked him not to live in memories and marry a girl. Ram escorts her to the airport and returned home. He sees that Jannu’s clothes were in there and he put them with the old memories. This is a beautiful story that won many hearts. Both of the actors have justified their characters and made a worth watching film. Stay connected to know more about this article.