World wide popular and favorite band BTS is getting in trend again after when they give a marvelous performance and grooved with British Band Coldplay’s Chris Martin. They have played this to promote their upcoming single which is titled My Universe. Here is the complete news that why the video is getting viral over the internet and who are included in the performance. So let’s cover the details with all the information. 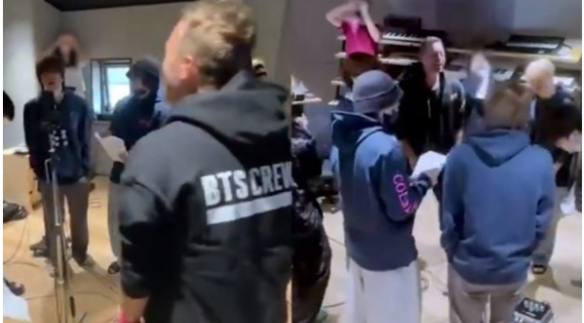 The viral video of this band includes the rockstars RM, Jin, Suga, J-Hope, Jimin, V and Jungkook sang with Chris as they stood around a mic. In the clip you can see easily that the BTS member Jungkook has worn a Coldplay hoodie, Chris sported a BTS hoodie. Here is the clip and you can watch it. When the video reached BTS fans everyone was amazed and enjoyed the video.

BTS Shares Glimpse as They Groove With Coldplay’s Chris Martin

Check out our exclusive preview clip of My Universe with #Coldplay!
🔗https://t.co/Y3yf2jWQKB#ColdplayXBTS #MyUniverse #BTS #방탄소년단

The video is indicating that BTS planning to give the most awaited thriller performance via this song and no doubt it will hit and break all the previous records. BTS Army and Coldplay joined the hands together for this song. It is a clear sign that they going to serve something special and something preplanned. Now the viewers have to need to wait for few days.

The video clip got viral on Instagram. TikTok is the first platform where the song clip got a huge response from the fans. Within few hours there were those who put the clip on their stories and shared the video with their friends.

Recent the BTS group has won many awards and it was just unexpected for the audience. Recently, BTS sat down with Chris for a special episode of YouTube Originals’ weekly music series, which was released ahead of the premiere of BTS Permission to Dance music video (Shorts Challenge version).