Once again, The Kapil Sharma Show is back with another interesting moment in the upcoming episode. This weekend, the show is going to be much interesting more than in previous episodes. Every weekend, we get to see some interesting cast members of the film industry. 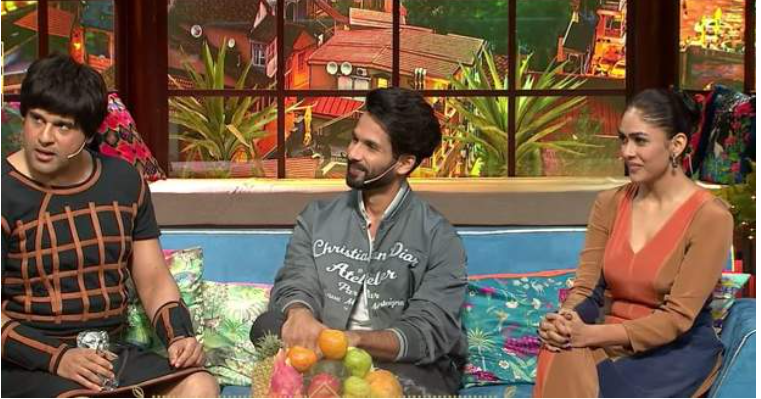 We have some popular cast members in the show who have given their appearance and promoted their upcoming movies, shows, and music videos. Finally, the show is back with another interesting episode tonight and maybe, it will be interesting to watch the next episode where two Bollywood celebrities will give their appearance.

According to the latest promo videos, two celebrities of the industry, Shahid Kapoor and Mrunal Thakur. They both have already given their appearance in the show and enjoyed it a lot but this time, they are back once again as the lead cast members of the upcoming movie, Jersey.

Shahid Kapoor and Mrunal Thakur are sharing the screen first time and their upcoming movie “Jersey” will be another hit of the actor and actress. Jersey is an upcoming Indian-Hindi language sports drama film which is written and directed by Gowtam Tinnanuri. We like to share with everyone that this is a remake of a 2019 Telugu movie of the same title.

Now, the stars are going to give their appearance on the stage of Kapil Sharma where some interesting moments will be created. As per the promo video, the episode begins with the entry of the cast members in the show with clappings.

Kapil shares that the plot of the movie is based on the Jersey of his son who is a little cricket player. Due to his financial problems, he couldn’t buy a jersey for his son and he decided to become a member of the Indian cricket team once again.

The movie has an interesting story and is loved by some amazing moments. Many enjoyful moments will take place when Kiku Sharda and Krushna Abhishek will come on the stage with their get-up to ask to reveal something about their life.

Krushna in Dharamveer’s character says that he also stole money to buy something for his child (Kiku Sharda in the get up of Sunny Deol). He says that he stole money for the bottle and everyone laughed but he drank so much milk that he grew and the buffalo calf remained small.

Not only this but Chandan Prabhakar will be also seen on the stage and grace some interesting moments. Many more things are yet to reveal about the upcoming so, let’s wait for the upcoming tonight that will air on Sony Entertainment.