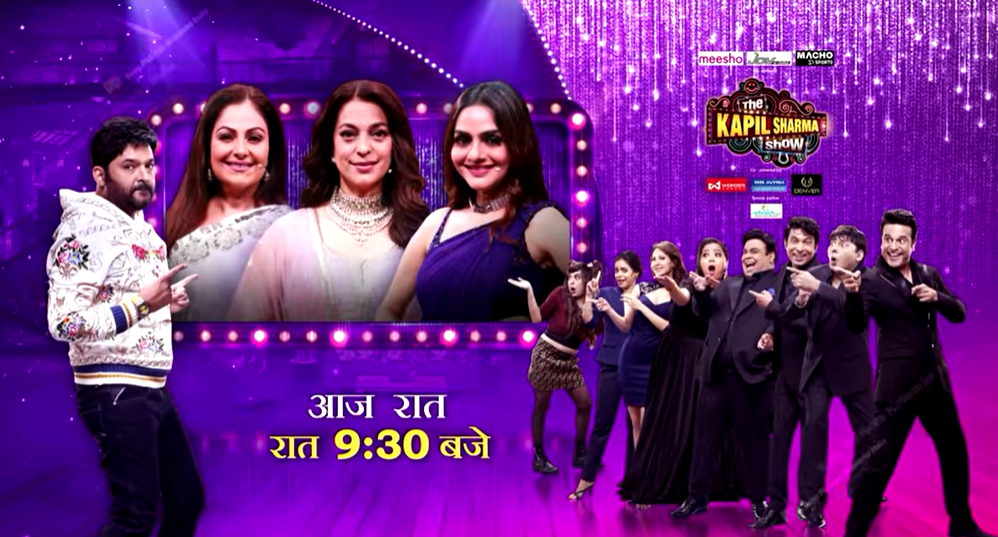 In the last episode, actress Taapsee Pannu, Supriya Pathak, and actor Abhishek Banerjee appeared in the show and spent some quality time with the audience and the host of the show, Kapil Sharma.

Another episode of the show has ready to appear on the television and now, it will be amazing to watch with your family because three beautiful sensational actresses of the Bollywood industry, Juhi Chawla, Madhoo and Ayesha Jhulka are going to be guests of the latest episode of The Kapil Sharma Show tonight.

The promo videos have been released on the Internet and fans are going crazy to watch their beautiful actress Madhuri, Madhoo and Ayesha who have worked in various movies in Bollywood as well as in other film industries.

Before the episode appear on Sony Entertainment Television, the makers releases the promo videos on the social media platforms to show some moments of the upcoming episode so, they could increase the excitement of the fans. The episode is all set but the fans will have to wait to watch the latest episode.

The promo shows the amazing entry of Madhoo, Juhi, and Ayesha. When Juhi takes her step to enter on the stage, Kapil sing “Tu Mere Samne, Mein Tere Samne” from Darr for her, later, he sings “Phela Nasha” for Ayesha Jhulko and “Maine Pyaar Tumhi Se Kiya Hai” for Madhoo and she also dances with him on the stage.

Kapil will talk with the trio about their experience of the film industry. Kapil also reveals that Madhoo and Juhi are relatives. Juhi says that yes, Madhoo is my younger sister-in-law. Kapil says that Juhi’s husband is elder than her husband. Kapil asks to them about their husband and Ayesha says that is it the husband’s show? Kapil says you three are my favorite always and Ayesha says so, remove our husband from here and everyone laughs.

Later, many more moments will be seen in the house when Kiku Sharda will come on the stage and dance to a song Juhi’s movie name “Tu Hai Meri Kiran” song and show a poster where Archana images will show. Everyone laugh after viewing the poster of Archana. Juhi, Ayesha, and Madhoo laugh at his performance. After Kiku’s performance and an amazing time with guests.

Later, Krushna Abhishek comes into the show with a get-up of Jackie Shroff in which he will act like him and even, he will give pillow and chain as a gift to Juhi Chawla and when Kapil asks him that why did he give this to her? Krushna says that yesterday I show a song in which she was saying, “Meri Ninnd Mera Chain Mujhe Lotta Do“ which is a song of Juhi. Many more moments will be seen in the episode so, let’s wait for The Kapil Sharma Show tonight at 09:30 PM on Sony Entertainment Television.