Here we are back with the latest episode of The Kapil Sharma show.it is one of the most entertaining comedy shows in the nation. It is going well with great TRP on television. This is a reality comedy show. As we all know that this show is very famous and popular among people. The Kapil Sharma show is also known as the TKSS in India. This is the place where many famous celebrities come for their movie and songs promotion. Here we have more information related to the show and we will share it with you in this article, so keep reading. 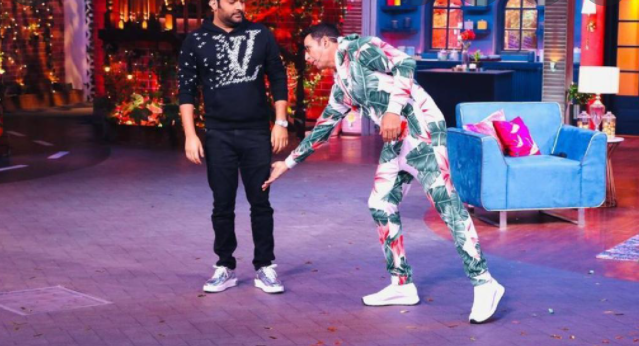 Now The Kapil Sharma Show is back with an amazing episode where we will see some famous personalities in the show. It will be a very amazing and wonderful show and tonight’s episode starts with the special appearance of an amazing actor and actress. Tonight’s episode is a Holi special episode. Here we will see Bollywood actors and actresses come for their movie promotion. They will come to the Kapil Sharma show and they will entertain their fans with their style. Keep Reading.

In today’s episode of TKSS, you will see some most talented and legendary actors and actresses together. According to the promo video, Kapil Sharma welcomes Akshay Kumar, Kriti Sanon, Jacqueline Fernandez, Arshad Warsi, Farhad Samji. They are coming for their movie promotion Bachchan Pandey. Akshay Kumar welcome Kriti Sanon and Jacqueline Fernandez on the stage in a magical way. The Kapil Sharma Show weekend episode will be very interesting with them. As we know that Kapil Sharma is the best comedian man. He always makes a comedy with his words and entertains the guest. Keep reading.

According to the promo video, Akshay Kumar says to Kapil that today he can’t tease Kriti because today their colors same they both are looking like a brother and sister, Then Kapil says that I will complain to Rahul then Akshay asks who is Rahul, Then Kapil says he is Kriti’s father then everybody laugh. After that Akshay Kumar shares his Holi experiences with lots of ways how people like to celebrate the Holi in different ways.

Later Kapil also joins him and makes fun of the people who celebrate Holi in a whole differtes way. He makes everyone laugh with his comedy. Kapil starts his questions from them in his comedy way. Then Krishna comes on the stage like an Abhitab Bachchan style for entertains the guest. So don’t forget to watch the full episode of The Kapil Sharma Show on Sony TV at 9:30 PM. Stay tuned for more updates.