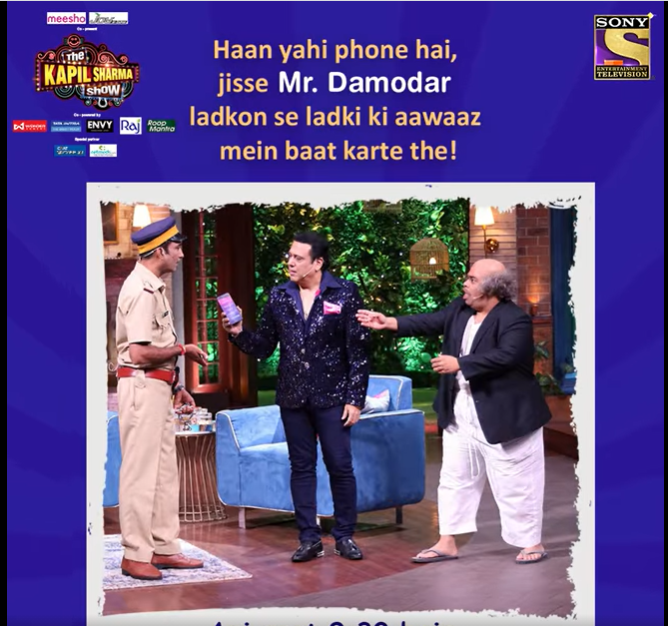 Last day, we got to see Bollywood actress Kangana Ranaut in the show with comedian Kapil Sharma and another cast of the show and now, another episode is ready to appear on Sony Entertainment at the scheduled timing.

Well, the last night was wonderful for all the watchers because Bollywood actress Kangna Ranaut was the guest of the show and now, another guest is ready for the appearance in today’s episode. Before telecasting the latest episode, the makers always release the promo videos of the shows to sharting the glimpse and excitement among watchers.

Again, the makers just released few promo videos where we can easily have a look on the upcoming guest of the show. If you never missed a single episode of the show and wants to watch the next one so, Bollywood actor and dancer, Govinda and his wife Sunita Ahuja is going to be a guest of the show.

Yes, a husband and a wife are going to be a part of the next episode that will be aired on Sunday. Along with this, the popularity of the show has already been on its high and Govinda is a genuine guest of every season. As we know that Kapil is a die-hard fan of Govinda and in every season, he invited him to the show.

Many things will be seen in the house of Kapil Sharma and the moments will change when Kapil asks Govinda that without looking at Sunita, he has to give some answers to his questions. Kapil asks him to the colors of Sunita’s earrings and later, asks what is the color of Sunita’s nail paints.

Does Govinda say that are you asking me a question and trying to beating from my wife? Everyone laughs and suddenly, Sunita says that Kapil from who are you asking these questions? If you ask me so, I can surely tell you the color of his underwear. Everyone enjoys the moment including judge Archana Puran Singh. Not only this but many more moments are yet to see of the show. So, just wait for the next episode as the next episode will bring lots of things for you. Keep watching and loving The Kapil Sharma Show.