India’s popular comedy show, The Kapil Sharma Show has been entertaining its audience with lots of funny moments and bringing some of the best personalities of the different industries in the world. We have seen lots of entertainment inside the show and viewers are excited to watch this amazing show because of its amazing content. 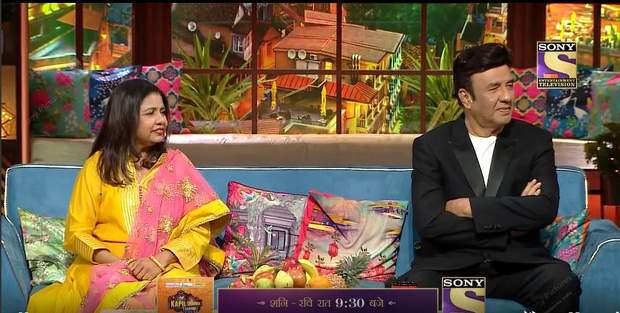 Most the people want to watch this show because of some genuine comedy by Kapil Sharma. The host, Kapil always comes every weekend with popular celebrities and today, the show will come with another celebrity of the Bollywood industry. We have watched the promo videos and we can easily share the latest updates with you.

Let us tell you first that there is no need to create confusion because the makers always release two promo videos that show different celebrities of the industry and will give their appearance on Saturday and Sunday. As per the sources, the show will be back with three popular singing sensations of the Bollywood industry who have given their voice in many hit movies.

According to the sources, singer Anu Malik, Amit Kumar, and Sadhana Sargram are going to become a part of the show. It will be interesting to watch them once again in the show.

Kapil asks his first question to Sadhana Sargam that when someone goes to learn music, the teachers teach Sargam like Sa Re Ga Ma Pa so, did she say to her teachers that Sargam is in my name so, I like to learn from further.

Later, Kapil asks Anu Malik if there is some rumors that when he met his wife the first time, he sang “Ek Garam Chai Ki Piyali Ho” song for her and she took this seriously and got married because of this, he started to drink coffee instead of tea.

When Lehri comes to the stage, he says to Anu that he proof Kapil Sharma a lier and Kapil says how did it possible? Lehri says that once a time, Sonu Nigam Ji came to our show and Kapil said that no one can take his place and today, Anu Malik is sitting on his seat.

Well, the moment will become more interesting when Amit Kumar will come in a get of women with Archana Puran Singh in male’s getup. They both will dance on a popular song “Aake Sidhi Lagi Dil Pe” which is interesting to watch. So, let’s wait for the upcoming episode of the show once again on Sony Entertainment Television at 09:30 PM.