Ammy Virk coming up in trend after announced his upcoming new song namely as Soorjan Waley. The Punjabi Music superstar getting in trend on Friday 25th September 2020. Here we will give you all the necessary details related to this news. We have every interesting information regarding the official release date of this song, cast, and a music label. along with this news, we have also told you where you can watch the song. The poster of this song includes a scene where Ammy Virk and actress Nimrat Khaira has appeared in the picture. 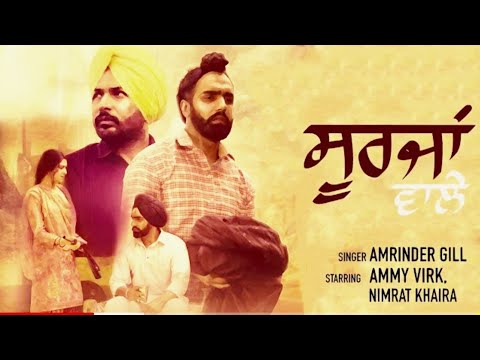 Soorjan Waley poster released by Ammy Virk on his Instagram official account along with the poster he posted a story of a scene of his song where he is on the scooter with the hanging Rifle on his back. Maybe the song is based on the story related to farmer strikes in Punjab.

when we think about Ammy Virk there are many hits by this young age Punjabi singer and he is not the only singer he also did fabulous work in many Punjabi movies. He plays every role and Different character for every type of audience. You can find his movie in every category whether it is a funny movie or it is a romantic sad love story everywhere he spread his charm in Punjabi film and music industry.

The above-mentioned song Surjan Wale is still pending and the audience waiting for the official release date of this song. The song is coming up with the record label of Rythm Boys and starring Ammy Virk and Nimrat Khaira. It is directed by the Stalinver Singh and produced by Virasat Production. Stay connected with us for the upcoming news and for knowing the official Release date of Soorjan Waley.