Here, we are back with another brilliantly written update of Sasural Simar Ka 2 that bringing the heat all around the country. The fan following of the country is very high and many people all around the world are eager to watch it. Now, the show’s upcoming episode will begin with Indu lightning the Diya in the temple in house. 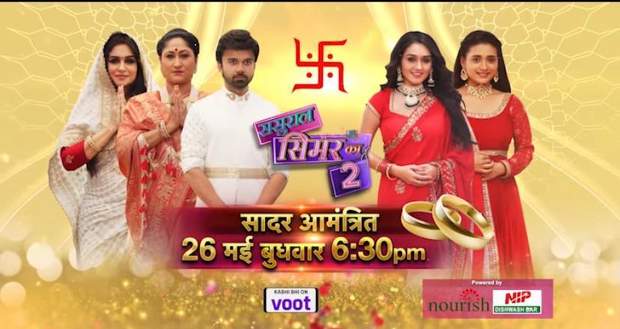 On the other hand, Avinash sitting on his bed worriedly, and suddenly the bell ring. Then, Indu says her Gagan came but when she opens the door, Aarav and Simar coming there. After hearing the doorbell, Avinash also comes outside the room by saying, Gagan.

When Indu sees Simar, she asks her where is Gagan as she said her that she will come with him and she will not let anything happen to Gagan. After hearing this, Simar says Bhai is fine but she doesn’t know where he is.

Then, Avinash recalls the 1 month notice period for the divorce of Aarav and Simar. After that, he is just about to fall by fainted but Aarav runs and holds him. Indu asks him to sit and then Aarav makes Avinash sit on Sofa. Aarav asks him if he is fine then he replies that he is Okay.

After sitting on the Sofa, he apologizes to Aarav by saying that his son ruined his respect and didn’t know how to apologize to Aarav. But, Aarav stops him and says he didn’t need to apologize to him and then he brings water to him. Avinash drinks the water and puts the glass on the table.

Hearing this from Simar, Indu feels bad and says that she is not a good mother as he didn’t come back home with Simar. On the other hand, Jogi takes Gagan to Yamini’s house and Gagan asks him if it is his house. Jogi asks him to sit and says that the entire state’s police are after him and they will think what to do. Gagan again asks who is he, but Jogi asks if he is hungry.

Gagan says can he call his mother and asks him for his phone. Then, Jogi sees Yamini Devi who is standing upstairs on the balcony. Yamini Devi nods and then Jogi gives him the phone by saying don’t try to address anyone. Now, the further story of the show Sasural Simar Ka 2 will be actually looking very brilliant and making everyone keen to watch it. The show is airing on Colors TV at 6:30 PM.