A horrific incident was reported on March 12, 2022, in Midtown Manhattan, New York where two employees of the Museum of Modern Art were brutally stabbed by an unknown man. According to the reports, both employees of the Museum were female who became a pray of this incident. The man got furious after being entered in the museum because his membership had been revoked. The incident occurred at around 4 PM on March 12. All patrons started to run away from the place for the exists after the man jumped over the desk and stabbed two women. As soon as possible, both women were rushed to the Bellevue Hospital and their injuries were not reported as life-threatening. 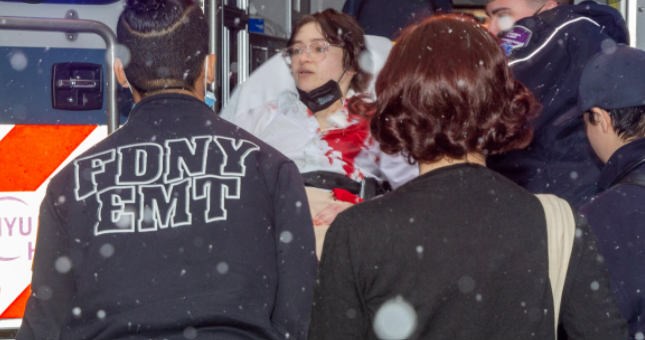 One of the female employees joked,” I am going to get hazard pay!” while being taken to the ambulance as she was covered in blood at the time. When the investigation began, police assured him that he is hidden in the building which was soon evacuated but after the search, they couldn’t find him. He is unknown for the police during the investigation. After CCTV footage was checked, the man was spotted in video recordings leaving the building told the NYPD Deputy Commissioner of Intelligence and Counterterrorism, John Miller.

According to John Miller, the suspect was trying to enter the building but his membership card he produced that his membership had been revoked and due to this, he got furious and stabbed those employees. His entry was subsequently denied entering the building. Miller also said,” A letter revoking the membership of him went out yesterday, and he showed up today with the intention of attending the film that was being played”. Maybe, the employees recognized the man as he was regularly coming to the museum. Miller added that one of the women was stabbed in the back, back of the neck, and collarbone.

Currently, the officers were already investigating the case in the connection with two prior incidents in Midtown. Many videos are circulating on social media in which the movement out of the museum was captured by the nearby people. Many visitors can be seen running out of the museum to save themselves.

Alyssa Katz shared a video on Twitter with the caption,” Went to meet friends at @MuseumModernArt. Greeted with a stampede of people fleeing, Museum being evacuated”. Recently, the investigation of this case is running and police are analyzing the CCTV footage of nearby area to track him.