Kaalakandi is a black comedy movie directed by Akshat Verma. He is also the story writer and director of the same genre movie, DELHI BELLY. Delhi belly is the movie based on teenagers and the audience really loved it so Akshat is back with another movie directed by him. Kaalakandi released on 12 January 2018 was one of the anticipated movies as Saif Ali Khan was not available for the cuts and finalization of the trailers as he was on the family trip. The trailer got average views but liked by the audience. Saif Ali Khan was in a miserable position as every movie he is giving is becoming a flop and he has to maintain his stardom and this movie was so important for that. 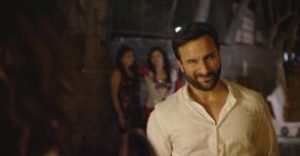 The film runs for 1 hour and 52 minutes and accredited A certificate. Star cast includes Saif Ali Khan, Sobhita Dhulipala, Kunal Roy Kapur. Songs of the movie are also not good. critics rated move with 2 stars. IMDb gave 7.5 ratings. Basically in the movie, Saif is a normal person but unfortunately is diagnosed with the stomach cancer, it becomes like a thunderstorm for him as he has never smoked or drink alcohol. He becomes heartbroken and thinks that he will enjoy his life to the fullest now and he does every crazy thing and how he gets in trouble, this is the movie all about. There is a good twist in the movie and you will have to watch the movie to know that but I think it would have been better. But the performances of every actor in the movie is really appreciable, they all gave their full contribution towards their characters. Saif is also doing justice with his role. On opening day the movie grabbed 1.25 crores despite seeing competition among three more movies. On the second day, it was estimated that the movie collected 1.20 crores. It was assumed that it’s fine and the movie is leading a slow and continuous growth but it is not so. The earning graph of the movie then fell down. On day 5 it only collected 50 lakhs on box office. The movie is assumed to be flop as earnings are decreasing day by day.