PUBG MOBILE INDIA released an official announcement that they will going to shut all the servers from India and will stop all the services in Indian market from 30th October 2020. That means now you can’t access Pubg Mobile India anymore with any method whether you have PUBG MOBILE app on your mobile phone. 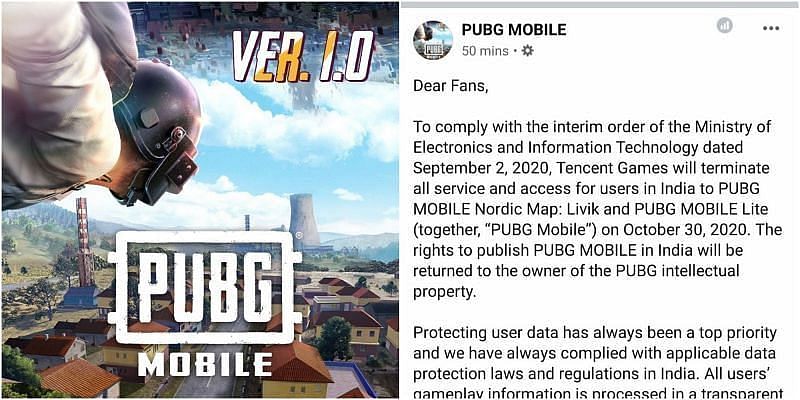 The termination of this game is announced earlier in September on 2nd September 2020. The Indian Government ban total 117 Chinese apps to concern for the privacy and protection of Indian users data. PUBG MOBILE INDIA is included in that list due to the server involvement of Tencent Chinese company.

Pubg Mobile India was the most trending and most popular battle game which get huge attention so far in the minimum time period than other games in the world. Everyone whether a child, elder, and an older age person everyone know Pubg. PUBG India has huge active gamers on its server but although it has faced Ban in India and due to this Suddenly withing a month it lost its 33 million active users.

Pubg Mobile India addressed its Indian users and did last its last tweet for Indian gamers that PUBG Mobile wrote, “Dear Fans, To comply with the interim order of the Ministry of Electronics and Information Technology dated September 2, 2020, Tencent Games will terminate all service and access for users in India to PUBG MOBILE Nordic Map: Livik and PUBG MOBILE Lite (together, “PUBG Mobile”) on October 30, 2020. The rights to publish PUBG MOBILE in India will be returned to the owner of the PUBG intellectual property.”

As we mentioned above Pubg Mobile has shut all the servers and services in India from 30th October 2020. But you can play Pubg on Pc version because it is originally developed by PUBG Corporation a South Korean gaming company. The PC version is not undertaken by Tencent and it is fully controlled by PUBG CORPORATION. Tencent is only involved in Pubg Mobile because they have 1.5 million stakes in Bluehole Studio.