Actor Prakash Raj celebrated his 11th anniversary with his wife Pony Verma on August 24. Fans are excited to see the picture of this beautiful occasion. The moment becomes so much excited when their son Vedhant wanted to see his parents get married in front of him. The couple not denied the demand of their child and initiated the event. Prakash Raj and his wife Pony Verma got married once again for the son Vedhant. Here are the details about the event. 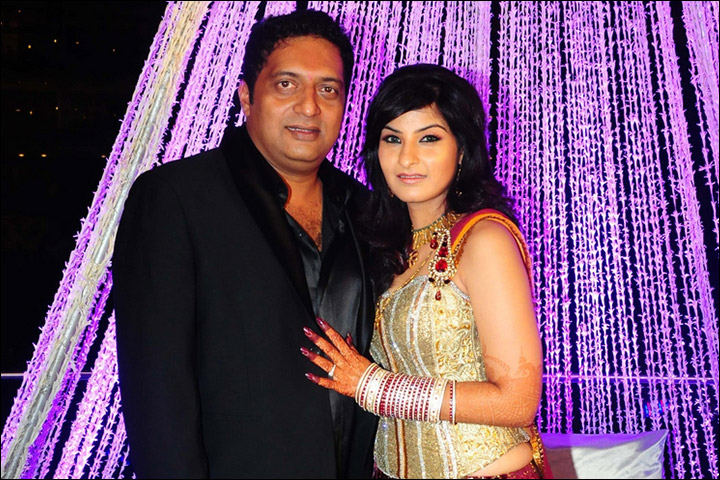 However, the couple has married 11 years ago and they have a complete family right now. On August 24, it was the anniversary of Prakash Raj and Pony Verma. On a special day, Prakash wrote on Twitter that he got married to his wife Pony Verma again.

The marriage took place because their son Vedhant wanted to witness his parents’ wedding and expressed the same. Even the couple fulfilled his dream as they exchanged rings and kisses in front of their children.

We got married again tonight..because our son #vedhant wanted to witness it 😍😍😍. Family moments #bliss pic.twitter.com/Vl29VlDQb4

The amazing memories-filled tweet is here where you can see the pictures and beautiful caption of the post. The tweet has been shared by the actor Prakash Raj. They got many wishes from fans around the world. The couple got blessings from worldwide fans and their friend and family.

Prakash Raj and his wife Pony Verma have two daughters Meghana and Pooja with son Vedhant. The happy family can be seen in the pictures and you can see how much their kids are excited and happy at the moment. His daughters are from his first wife Lalitha Kumari. Unfortunately, the couple has divorced in the year 2009.

“It turned out so right.. for strangers in the night” .. thank you my darling wife .. for being a wonderful friend.. a lover and a great co traveller in our life together..🤗🤗🤗 #happyweddinganniversary @PonyPrakashraj pic.twitter.com/xPVZb6Ibb9

Later, we got an amazing post by the actor Prakash Raj wishing his wife on the special occasion of their Anniversary. He shared the picture of their marriage. In this picture, you can see the couple looking into each other’s eyes. Definitely, the moment brings all the memories with this cute picture.