A picture or post by People for the Ethical Treatment of Animals or PETA has been gone viral and continuously millions of people regularly coming in touch with it. The motive to share the cringe-worthy art is to discourage people to drink cow’s milk on National Boob Day. Not only this but the organization also wrote a very big caption on the series of posts that they shared to discourage people all around the world. Just after the post, the attention of the people and netizens coming towards it, and everyone thinking about the post as the organization trying to show in the post. 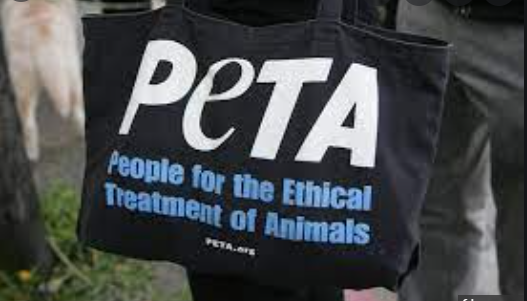 The organization wrote in the caption “Are you drinking from a cow’s boobs this #NationalBoobDay? Now that we have your attention: the dairy industry doesn’t want you to watch this, but cows are literally dying for you to see it. #DitchDairy Reminder: Cows need to have babies in order to produce milk.

Just like human mothers, the milk they make is for their babies”. Otherwise, many netizens also shared the post of the organization and regularly trying to encourage people to raise their voices against this. As all of us know that always whenever people joined any conversation some groups have been created some are against and some talking in favor.

Because of the conversation, the hashtag becomes very popular and everyone talking about it. The intention behind sharing this type of picture is clear as the organization just trying to show the reality of the dairy and meat industry.

The picture that PETA shared on their official Twitter showed a cow standing a guy laying down on his back and drinking from the feeders but, the animal looked annoyed. The picture is cringed but the message behind it is true and precious as cows are also mothers and their calves need the milk that cows produce.

After that picture hit social media, many people take the wrong meaning of it and sharing some bad ideas, and showing their mentality on Twitter. The hashtag has been trending on social media and everyone taking their interest in it as PETA initiate to discourage people to drink Cow’s milk but people take the picture in the wrong way and start showing their mentality in front of everyone.

The comments that the netizens sent to the hashtag are actually disgusting but many people also understand the exact meaning and agreed with PETA. The message behind the image is real and important to understand by everyone. So, we need to discourage people to drink cow’s milk.