Social media has become a platform to spread anything across the world in just a few minutes or hours. Even, you can get any kind of news, details, and anything on this platform but you need to be a part of this platform. We have seen many things for the last several years that the platform has been circulating many stories, pictures, and anything which is mostly liking by netizens. Maybe, many netizens have addicted of this platform and spend their most of time to search anything. You can watch any type of video which is going viral over the world and share it with your friends. While funny videos, images, and moments have become meme material for them. 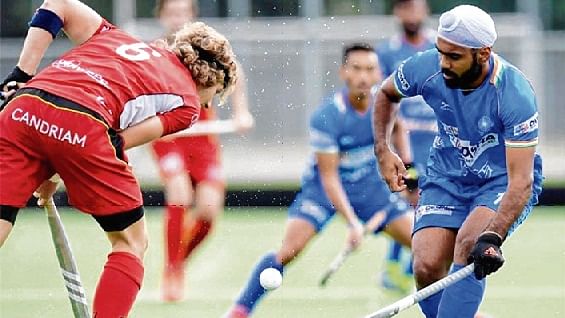 Today, everyone knows the meaning of memes that describes any type of funny video and picture. Daily, some people create their own memes and share this on social media. While some memes are coming from the world popular games, the 2020 Tokyo Olympics has been attracting millions of fans across the world and we can also see some funny moments on the field or ground.

We have already been told that the funny moments could be seen any time and maybe, the netizens captured the moment of a recent match that was played between the Indian and Belgium Men’s hockey teams.

In the 2020 Tokyo Olympics game, the Indian men’s hockey team accepted three goals from the penalty corner and also, one more goal from the penalty spot. The Indian team lost by 5-2 to the Belgium hockey team in the semi-final of men’s hockey in the 2020 Tokyo Olympics. After some moments, netizens and fans convey their disappointment or sadness on social media.

Indian men’s hockey team lost to Belgium in the Semi-Final match as the hopes for the first gold of 2020 Tokyo Olympics since 1980 have gone to its end. After the match, the disappointment of fans turned into memes material, and with thousands of tweets and memes started surfing on the Internet.

Not only this, but some people also supported the men’s hockey team and giving wishes to them to win in the next match and win the Bronze medal for India. The last match was not enough good for the team but our player did their best to perform in the game and they did but it was a game and anything can happen in just a few seconds. Now, let’s wait for the next where Indian players will fight for the Bronze and our best wishes are with them.