Pandya Store June 6th 2022 Written Update Today: An Indian Hindi television serial that was premiered on 25 January, in 2021. Pandya Store has been telecasting since its starting on Star Plus and OTT platform. The show is all about a middle class family. All the financial needs of this family is based on their store which names to be Pandya Store. 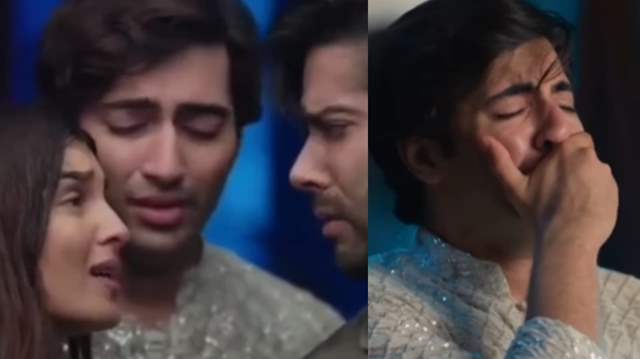 So, here we are back with Pandya Store’s episode update of 6th June. In this episode, the show starts with Raavi calling Suman and Prafulla. Raavi who was walking through the road does not notice that a car is about to hit her. and the car hits Raavi. Shiva standing on some distance from Raavi sees everything and when the car hits Raavi, he also scolds the car driver for not driving the car carefully. Later, Shiva lifts Raavi with his arms and makes her sit in a corner of the road. Shiva asks Raavi where she got lost and what she was doing on this road. Pandya Store June 6th 2022 Written Update Today

Shiva also asks Raavi whether she is fine or not. In response to Shiva’s questions, Raavi starts to cry saying everything that has been done, has happened just because of her. Raavi tells Shiva that when Raavi visited Prafulla’s house then Prafulla told her that her parents died because of Prafulla and Prafulla also lost her four factories because of Raavi. Prafulla also calls Raavi misfortune. When Shiva gets to know that Prafulla has said these words for Raavi, he gets angry and goes to Prafulla’s house with Raavi.

Shiva reaches Prafulla’s house and calls Prafulla. Shiva tells Prafulla to get ready to visit somewhere to spend some family time. Shiva gives Prafulla a handbag and sunglasses, Prafulla gets so amazed by Shiva’s behavior. Shiva also sprinkles perfume over Prafulla, telling her that it is poisonous and it will start showing its effect in the next 10 minutes.

Anxiously Prafulla starts to run from there, but Shiva holds her and reproves her for calling Raavi misfortune. Shiva also says that Prafulla is a misfortune for the family. Shiva says when she held the factories his father got a heart attack and just because of Prafulla. Prafulla tells that Raavi wanted to know why these things were happening, so Prafulla told her the exact things. Reacting to the situation, Raavi says that Prafulla is not wrong. Prafulla requests Shiva to leave her.

After a few more dramas, Prafulla asks Shiva for the medicines, and Shiva tells her to smell her slipper. Prafulla also does smell her slipper. Later, Shiva finally tells that there was no poison in the spray, when Prafulla tells Raavi to take Prafulla to a doctor. Shiva left the house with Raavi, after Prafulla told him that the latter informs him that everyone knows how Raavi’s parents have died. And even if nobody believes then the latter says to ask Suman. Shiva doesn’t believe on what Prafulla says.

In the next scenario, AC mechanic asks Dev to grab the wire. Shiva comes back to home with Raavi. Shiva asks Raavi to turn on the main switch, and she does that. But Dev gets an electric shock by that and shouts out loud. Everyone hears his loud anxious voice and comes to Dev, thinking of what happened to him.

Shiva and Raavi ~ meant to be ♡

Two souls, each carrying their own demons and fighting their battles alone; both coming together to eventually find solace within one another’s arms, to have each other to lean on, and to share their sorrows with 🥺🫶🏼#PandyaStore | #ShiVi | pic.twitter.com/pNV8LBSf86

When Dev was asked what had happened he tells that, he had turn the main switches off but someone turned them on, so he got shock. Raavi tells everyone that it happened because of her. She starts crying saying that she is a misfortune. Raavi says sorry to Dev and also she told him, that she didn’t do that intentionally. Interrupting in between Shiva extracts that it was his mistake, cause he had asked Raavi to turn the main switch on. In reply of Shiva, Raavi tells Shiva not to blame himself for her mistake. Then Dhara tells Raavi that things could have happened because of others’ mistakes too, and she is not a misfortune.

A scorpion falls from the roof, everyone gets so shocked. Rishita speaks that Dev’s life was saved because of Raavi. The scorpion could also have bitten any of them. Rishita gives a hug to Raavi. Dhara also says that Raavi calls her misfortune, but has saved two people. Prafulla meets a man who tells her that his relations with Raavi is not good. The man is a drama artist. Prafulla makes a plan that would scare Raavi. Whereas Shiva tells Suman that Raavi wishes to know about the accident her parents died from. Questioning over this request by Shiva, Suman says why she wishes to know. Dhara informs everyone that Raavi thinks that she is a misfortune to this whole house and the entire world.

Prafulla would have told Raavi while they were on their way to the hospital that her parents died. But she didn’t tell her that her father was also an alcoholic, said Suman. Raavi gets extremely shocked by what Suman says.