Pandya Store 7th June 2022 Latest Written Update Episode: We are here with the written update of the Pandya store on 7th June: The episode starts with Suman explaining the death reason of Ravi’s parents. He tells Raavi that his dad was an alcoholic and he drove his bike after getting drunk and why she is blaming herself for their death. Raavi then says she was ill that’s why they met in an accident. Suman then gets angry and asks her why she is blaming herself. Raavi leaves the room and Suman tells Dhara that maybe she was talking to Prafulla and maybe after hearing that she is creating different thoughts in her mind. 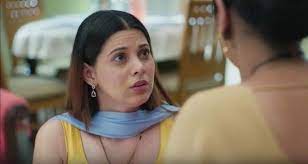 Shiva says that he will try to make her understand, he goes to her and sees Raavi standing on the balcony and crying, then he says she is not responsible for anyone’s death. He tries to lift her mood and asks her to get ready for a movie date. Raavi after making efforts by shiva agrees. Shiva then tells her family to get ready. Rishita then feels some moment in her womb and she gets happy after feeling that move. Pandya Store 7th June 2022 Latest Written Update Episode

Raavi comes to her and she takes her hand and put it on her stomach Raavi also feels the moment, she gets happy. Rishita says see you are not unlucky. Prafulla hears everything and gets sad. Shiva & Dev then also feel her moment in bump. Dhara gets emotional after feeling the moment and talks to the baby that they promise they will love him the most.

Shiva then says that he is taking Raavi out. Prafulla then hears this and calls Hari to come to the stall of chaat. They both then reach a stall of chaat and shiva brings a box for her, then she is having paani puri and Prafulla then finds a moment that how Raavi can be alone she pushes Shiva bikes and Shiva goes to see that.

During that Time she sends Hari to Raavi as an astrologer and he says to Raavi that she is unlucky and because her parents die and now her unlucky fortune will now affect her family & her husband too. If she doesn’t want anything to happen to anyone because of her she should return to her aunt’s house and her bad luck can fade. Raavi gets shocked after hearing this from an unknown and she again started thinking that she can’t hurt anyone because of her bad luck The episode ends here.