Pandya Store 10th June 2022 Written Episode Update: We are back with the written update of The Pandya Store on 10th June 2022: Here the episode starts Suman asks Dev & Gautam how they get injured. Dev and he says that they fall down on the field. Dev asks about the party preparation. Rishita says that the food is ready, and Gautam says we will sell this land after this party. Siva is at the store and he loves a dress and asks the owner to side it. Gautam says finally the birthday party is happening in our house, Rishita says don’t worry we will celebrate his birthday too. 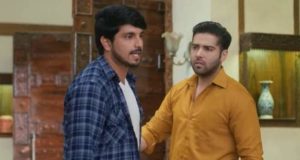 The next day, Shiva’s birthday comes and Raavi wakes him romantically. A romantic song plays, and Shiva asks her to put him up and make her close to him. He then asks her to give him some sweets, Raavi says she doesn’t have any sweets. Shiva says he will take his sweet on his own. Raavi is shy and he asks her to give him a kiss every hour as a birthday gift. Raavi taunts that his name and he both are opposite as his name means innocent. She apologizes that she didn’t bring any gift from him. Shiva says that she is the only gift for him. Pandya Store 10th June 2022 Written Episode Update

Dhara & Suman comes to shiva and wishes him and gives blessings to him. Dhara then asks Gautam to manage money for Krish’s college fee. But Krish says he will manage by himself. Raavi then sees her ring and thinks this ring can help them to cover almost expenses.

Dhara does aarti of Shiva and suddenly he falls. Gautam asks him is he fine. He says nothing happened to him. Dhara then applies a black dot on Shiva’s neck to remove the bad omen from him. Raavi then visits the jeweller shop to sell her ring, The jeweller says he can give 25,000 for this ring. She brings the money. Rishita then hears Dev saying someone grabbed their land. She asks who grabbed our land, he tells the name Jeevenlal. Dhara asks what happens.

I hope that Raavi doesn’t get scammed 😖#ShiVi #PandyaStore pic.twitter.com/o6ZMrTbfw7

Rishta tells them everything and asks them why didn’t they tell him earlier. He said we thought we will tell you this after the party. Raavi comes and listens and says this all happened because of her. Shiva then says he will get their land by himself. If they think they can take that land, I will not go to let this happen. The episode ends.