TMC MP Nusrat Jahan finally revealed that her marriage to Nikhil Jain is not valid in India according to Turkish law. They haven’t registered their marriage here in India and separated from November 2020. Nikhil also clarified that he has files and annulment in Kolkata and they have been separated from last year. He stated that “I have been separated since November 2020 last year and we are not living together”. He refused to comment further on the matter. Nikhil given the statement in an audio interview with India Today on Tuesday. He said that the case is sub judice in the court of Kolkata where he also admitted the separation. He said that , “These are legalities, I don’t really want to comment on anything she’s said because the matter is sub 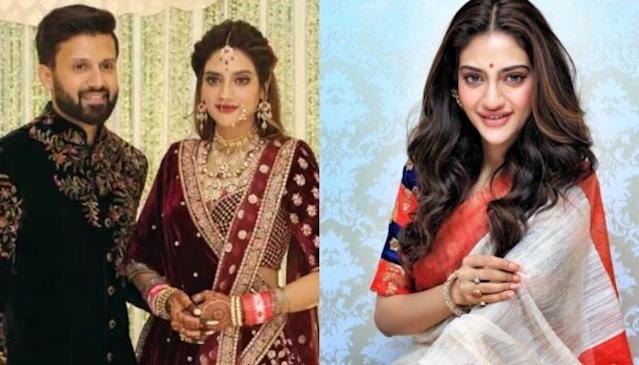 judice in court. I have filed a civil suit in Kolkata and I will not comment on it till it is in court”. Nusrat also revealed that her family’s jewelry and other assets have been illegally held back. She complains that her funds are also being used without acknowledgment. She has given some statements that “As per Turkish marriage regulation, the ceremony is invalid. Nusrat has also given some statement onher marriage in Turkey. She said that, “As per the Turkish Marriage Regulation, our wedding ceremony is invalid. Since it was a cleric marriage, we need a valid certificate under Special Marriage Act of Law, it will not considered a marriage in India,

but a relationship or a live-in relationship. If our marriage is not registered in India then the question of divorce doesn’t rise. We are separated from Novemeber 2020, but we didn’t speak about it as I wanted to kwwp my private life to myself. The alleged marriage is not legal, valid and tenable ad was not a marriage at all in the eyes of law. If I visit any place for business then it shouldn’t be the concern of whom I am separated to. I have spend my money to my sister’s education and to support my family financially. I haven’t used anybody’s credit card which I am not related to anymore.

My money has been accessed from my bank from the one who claimed to be rich and been used by me. I have filed a police complaint and concerned banking authorities. He has withdrawn money from my different bank accounts without asking me. I am still trying to clear things with the banks. My belongings like jewellery and clothes are still with him which my family has given to me. I have made my own identity and I will not let anyone share the limelight. I would request my friends and media to not give any comment on the situation. To know more about this article stay connected to us.