Mumbai Bandra’s Building Collapse: We are here to tell you about an incident that happened in Mumbai. Many people are searching for this news, as 16 people got injured in this incident. Well if you want to know every detail of this news, you are in the right place. that took the life of one and injured 16 people. A two-storey building falls in Bandra West, Mumbai. 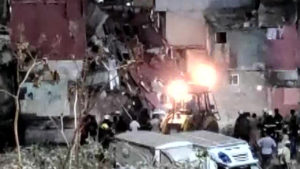 This incident happened last night around 12:35 am, and one person died in this, and 16 got injured. The injured people were immediately sent to the hospital. The people injured in that building were all the labors from Bihar. All the officers & fire brigade came there on time and save all the injured ones except one. Mumbai Bandra’s Building Collapse

As said by an official, two to four persons are maybe stuck in that building and our team is trying our best to find them. After getting the news of this incident, the fire brigade, and other police & ward members of Brihanmumbai Municipal Corporation reached to the spot.

BMC tweeted that In Shastri Nagar, a G+2 building has fallen in Bandra west, and two to four labours are believed to be stuck many got injured but they are safe now. BMC also said that we can’t save one person, and sadly he is now not anymore 16 were injured but they are now okay.

As per information, the one person who died in this incident is identified as Shahnawaz Alam who was 56 years old. He was from Bihar and now his death news has been told to his family. His family is coming to see him and the government has said that we will give the help to the family as they can. The officer also said that they will get help from the organization. Well, other injured people were sent to the nearby Bhabha hospital where they all were saved.

Just heard of the building collapse at Bandra West. @mybmc Fire Brigade is on the spot and rescue operations are underway. The exact number of injured is awaited from the hospital. Wishing them all a quick recovery. Will be in touch with the authorities for updates.

People should take the advice from the builders and use the best material as this can bring risk to anyone’s life. The heavy rainfall in Mumbai caused more problems and traffic in their city. We will update you regarding this news if they found more people in that building until then stay connected with us for more latest information.