A frightening incident took place at a godown in the area of Delhi’s Peergarhi Chowk on Sunday, August 08, 2021. As per the sources, a factory or godown near Peergarhi resisted with fire broke at the place. The incident took place at around 10:30 AM when only a few workers were available inside the factory. As per the localities information, almost 11 workers were available inside the godown who were working while the fire broke. 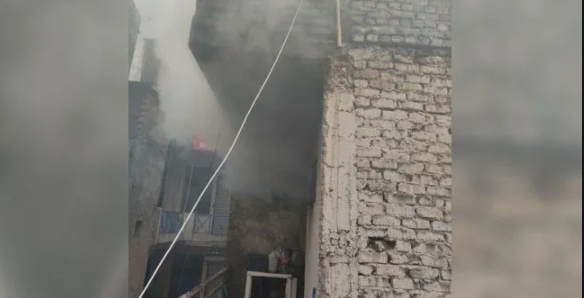 Massive Fire Breaks Out at Godown In Delhi

When the incident took place, some of the workers ran away from the spot but the local sources are claiming that three workers are badly injured and as soon as possible, they rushed to the nearest hospital, and currently, their treatment is underway.

Around 1:30 PM, the fire bridge reported a call from the incident and in just a few moments, around 15 tenders reached the spot to extinguish the fire and the operation started to save the trapped people. Some tenders went inside the godown and saved some of the workers from the spot.

Along with them, police and ambulance also rushed to the spot for immediate treatment. While the official’s reports are saying that there is no casualties recorded at the moment but few locals said that 2-3 workers have rushed to the hospital the vehicles.

Since the fire fighting operation have started, they faced lots of problems to extinguish the fire at the moment as the area was too many narrow streets to reach the godown. Along with this, the reports says that all the floors of the godown were filled with lots of flammable things and that was a working place of nail-polish material. Firefighters took 2-3 hours to handle the situation and due to the heavy rain at the place, the fire couldn’t spread nearby houses or godowns.

Many images have been leaked from the spot and surfing on Twitter and other social media pages. Currently, the orders have been issued by local police to keep away all the people as the fire came into control.

The viral images and videos can be seen over the Internet and check out the situation on the spot. As per the sources, it has been a recorded loss of around Lakhs of material in the godown. Well, it is a matter of relief that no one died in this incident. Stay tuned with us, we will provide you each and every detail from the spot.