Mariyam Khan Reporting Live is the new episode started on star plus. Mariyam is a cute child which is unwilling to go to school and is very lazy. She sleeps all the time. She listens her abbu talking to someone on phone. Mariyam and her father talks. She asks what is bribe. He says if someone is offering you something to hide truth. Mariyam says okay. Mariyam sees newspaper and does not understands anything.

Her ammi comes and Mariyam says ammi has two horns and only i can see. Her mother asks if she does not have to go to school then i will make you marry. Mariyam says i am going. Her mother says if you have sold that property as Meher’s relation is fixed and we have to manage everything. Mariyam cries as she do not want to go school. She becomes ready and sees a glass of milk. 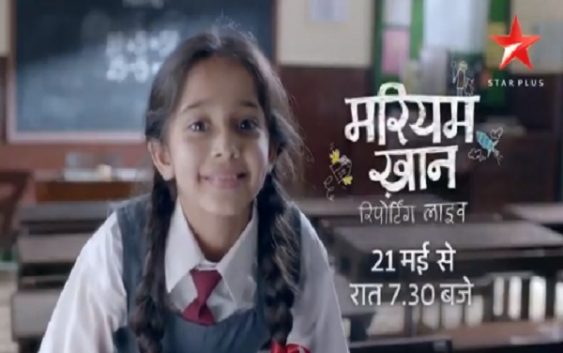 Another personality is revealed. Some old aged person comes. Mariyam shouts dada. Mariyam asks if you are coming with me to school. He says no i am dropping you to school. They goes and Her grandfather talks to her. Suddenly some car stops in front of their car. Another man comes out and says Ijaz khan. Mariyam’s grandfather says Sarfarash Thakur. She tells that he is our family enemy. They stops the car and Mariyam sees her friend Lallu and stops him. She says i am going to school with my friends.

Mariyam talks to allah and she says i want to tell you about some evil spirit. She refers a woman and that woman asks from principal that why you did not give admission to my child. She asks how much donation i should give. She did not find her purse. Mariyam finds her purse. That woman blames Mariyam.

Mariyam comes home. Meher becomes sad and Mariyam goes to her. Letter from court comes and her mother becomes sad to see that. She asks what is this, is this bunglow is in the name of Fufi jaan as court is saying this property is now theirs.

Her mother says how i will get my daughter married and what will happen now. Mariyam’s abbu says that everything will be fine. She says what type of person are you. She says bad words to him and says please do one more favor that do not encourage Mariyam to be a journalist.