An explosion took place in the District and Sessions Court complex in Ludhiana at around 12:22 PM on Thursday, December 23, 2021. According to the sources, the blast caused several people and they all have been rushed to the hospital after the incident took place. According to recent sources, two people lost their lives, and on the other side, four other people were badly injured in the explosion. 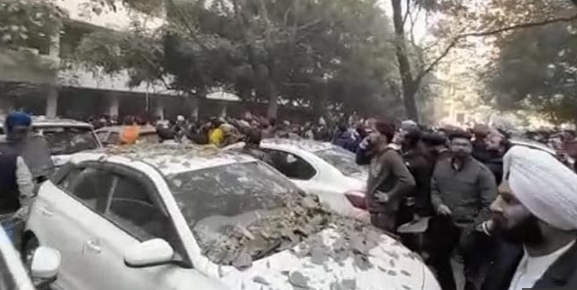 The exact count of injured people has not been made yet but it has been confirmed that almost two people died in this horrific incident. Our sources are trying to catch more updates on the spot.

Police have cordoned off the area to find out something suspicious and emergency services, fire tenders, and medical help are on the spot. When the police began the rescue operation, they said that an investigation has been launched to find out the cause behind this horrific incident.

When the blast took place, a large number of people gathered outside the court to know the situation of the accident. Along with this, several videos have gone viral on social media which is showing black smoke are coming out of the six-story building and we can guess how a big accident has been carried out.

Well, it was news of reliving that several lawyers were on strike on Thursday and therefore, only a few lawyers were present in the court complex at the time of the explosion.

The Chief Minister of Charanjit Singh Channi said that the guilty will not be mercy. He also mentioned that the Punjab election is close and the government is alert over such incidents.

A team from the National Bomb Data Center was also rushed after the incident took place along with a two-member team of the National Investigation Agency. Now, the investigation is underway. Stay tuned with us to know more updates.