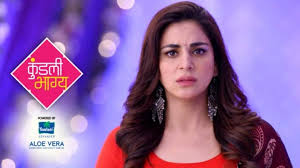 We will see that Kundali Bhagya is getting so interesting day by day. Then Prithvi thinks he cannot let Sherlyn kill Preeta and he thinks he will save her. Sarla becomes okay and runs from the ward. Then she goes in the ward of Preeta and she does not find her. Sarla gets shocked. Sherlyn says that I am married now and asks her to see that she has now won. Sherlyn says you both have spoiled my life. Sarla becomes so confused. Sherlyn tells her that she is not here and has gone somewhere.

In Kundali Bhagya 13th June 2019 episode written updates, we will see that Sarla slaps Sherlyn and then she gets angry. Sherlyn says that you both have spoiled my life and I will kill you both. Sarla goes outside but she stops her. She hurts her from vase. Sherlyn gets out of the room and locks Sarla inside. Preeta goes to the house of Luthras and says I am sorry Karan I am late but I have got into some trouble. Preeta says I will not spare you Sherlyn. Prithvi gets the call of Sherlyn and he gets irritated. Sherlyn says what happened. Prithvi asks her not to shout on him.

Prithvi says I have tried finding Preeta but she was not there. Prithvi says I went back to Luthra house and now when she will come here then I will execute my plan. Sherlyn says what is the most important thing to us is our revenge. Sherlyn says that we have to take revenge and that’s why you have sent me here and asked me to marry that Rishab. Sherlyn provokes Prithvi and then he says no one is more than this revenge. Sherlyn asks him to kill Preeta. For more updates of Kundali Bhagya episode updates stay tuned with us.