As we know Kumkum Bhagya is a very popular show among people, this show is running with the good TRP on Television. Here we are sharing a written update of the latest episode. According to the latest promo videos, the show is going to be very interesting and entertaining. The latest episode starts with, Vikram entering the room and asking Siddharth why did you come here, you shouldn’t have come here. Sid hugs him and says that he needs 40 lakh Rupees that’s why Vikram met him otherwise he didn’t meet him. Vikram says even you didn’t call me. 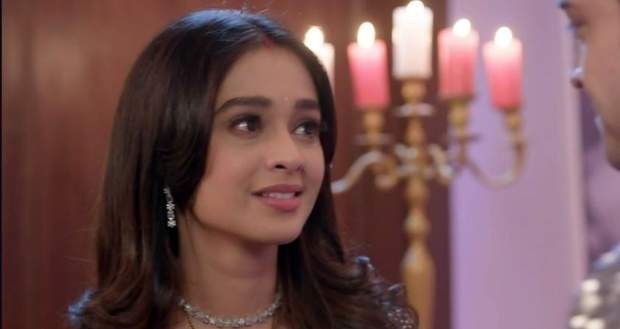 Sid replies that he was thinking that he will upset with him. Vikram says that he has realized that, that was not Sid’s and Prachi’s mistake and added that they both were unconscious and someone had created some confusion. Sid says it was not someone else, but Rhea and she had told him that Chachi was also with her in this plan. Vikram says to him that if needed anything he can tell him.

Prachi runs happily and goes somewhere. Rhea keeps her eye on her and thinks this lamp will be set off very soon. Sid comes to Prachi and then Prachi asks the reason to come here and she says if Ranbir will see him here he will be angry. Sid says nobody will recognize him and he asks Prachi about her happiness she says she is very happy because she is going to tell Ranbir about her pregnancy. Sid replies to her that he is very happy for her, and says should tell all about the truth then they will be her side.

Rhea comes here and she recognizes sid, and she listens to Sid to say that she is coming here to meet Prachi and the baby, she thinks that the baby is them and they are trying to give the name of Kholi’s family, she takes photos of them when they talk. When Prachi faints due to weakness and sid holds her in his arm then Rhea takes photos again to expose both of them.

Ranbir is happy and checks the time. Ranbir asks Shahana what is going on between Prachi and her? Shahana says she should ask him both and says what is going on? Ranbir replies to her, she will know at 9 pm. Shahana says he is saying as if a live telecast is going to happen. She says you both were fighting unnecessarily. You will see the driver will give the report to Ranbir and Rhea will ask where is the report, she says he has given the report to sir, she gets shocked to hear this. Rhea collides with Ranbir with a purpose and makes the envelope falls down. She then says that she got a fracture in her leg. She finds the reports missing.

When Pallavi asks the caterer that, why the food is so expensive then he tries to explain him by writing behind the reports of Prachi and Pallavi says she will check it later. On the other side, you will see that sid says he is happy for Prachi’s smile. Rhea searches for the reports and thinks where did it go? Aliya notices her and she asks the reason.

Rhea tells her about the report, and he asks her to find the report then they can expose Prachi that the baby shares with sid.  Aaliya goes. Rhea thinks to drink water and gets up. She thinks she shall be fine before the reports are found. She looks at someone. Episodes end, stay tuned for more updates.