Kumkum Bhagya 9th June 2022 Written Update Episode: Today we bring you the latest updates on the popular Indian TV series “Kumkum Bhagya”. We will discuss a little about what happened previously and what will happen in the latest episode based on the updated promos of the episode. We saw in the last episode that Ranbir was planning on getting a divorce from Rhea after getting her drunk with the help of Stanley. We then moved on to an argument between Pallavi and Vikram on whether Rhea is the daughter-in-law of their house or not. 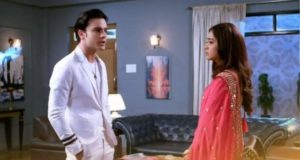 Dida asked Rhea to leave the house and asked Pallavi to pack her stuff. Rhea refused to do so and said that she will never leave the house. Now that we’ve had a little preview of what happened, let’s move on to the updates of the show that is going to be aired on 9 June. Kumkum Bhagya 9th June 2022 Written Update Episode

Rhea is telling Pallavi that Ranbir will propose to her with the ring that she found. She doesn’t realize though that the ring was not for her. Rhea is thinking that Prachi and Ranbir are taking a divorce. Hearing this made Dida faint and Pallavi runs off to get water. While Dida is unconscious, Rhea tells her that she is Ranbir’s everything now and said that she troubled her intentionally that’s why she doesn’t like her.

We then move on to Prachi and Ranbir as he tells her that she is having mood swings because of her pregnancy. The door is locked so he can’t even leave the room.

He heard a sound and ran to see what happened as he saw Prachi had fallen on the floor and asks Ranbir to lend her a hand. They then start arguing again about their relationship. Prachi then says that he loves Rhea and married her. Then they talk about how to get out of the room as the room was closed. They decide to leave out of the window.

Vikram asks if anyone has seen Ranbir as his clients are asking. Pallavi replies that she doesn’t know where he is but she knew with whom he is. When he asks she responds that he is with the one they call his wife. Vikram doesn’t say anything about that but stands on refusing to accept Rhea as the daughter-in-law of their family.

Ranbir and Prachi are on a terrace when Ranbir asked that if she remembers their first meeting. She says that she remembers and starts telling her the details. He then asked her what happened on the rose day when he proposed to her. She then tells him that she is leaving as he is just passing time.

When u get what u wish for makes you more happy and joyful…I always dreamt that-RK to handle Prachi’s mood swings either its of Period time or Preggy…Finally i am getting the wish which i always wished for😭😭😭❤️🧿✨
Awwww🤭😂😭🥰👀#pranbir #kumkumbhagya pic.twitter.com/QinvPr6zig

He asks if she can feel the air touching her. He says if she remembers the time when his sights were not leaving her as she was drenched in rain. He tells her that the girl that day was the one who taught him to live life and when he learned to live she was the first person he fell in love with. She says that there is no point in talking about their past but he goes on to talk and doesn’t stop. He says that they can never be separated as they are bound by their Kumkum Bhagya.

Rhea then says that she will make their life difficult and get revenge on what he did. Stanley is hiding in the cupboard and makes a little sound. This makes Rhea alert as she picks up a bat and goes to check the cupboard. When she opens the cupboard she saw nothing as Stanley hid himself using a blanket. Rhea tells that she is drunk as Pallavi tries to get the water to wake up Dida.

We then move on to Ranbir and Prachi arguing, again…He assures her that he will love her every day and is still her baklu. They get emotional as Prachi sits while holding his hand. The Episode Ends.