The upcoming episode of Kumkum Bhagya, July 29, 2021, will show something interesting as Rhea will come to the Pallavi house with Sid. Let’s find out what is the reason behind this and what will happen next? Prachi, Ranbir, Sid, and Rhea come to the door of Pallavi and Ranbir says to Pallavi that she knew very well that he wanted to marry Prachi but she tried to stop. 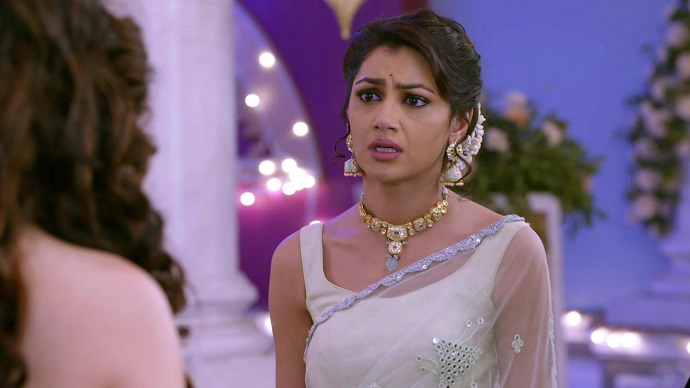 While Rhea is under the Ghunghat. Ranbir says that he did not come here for me, Prachi or someone else but I came for only Sid because you did not listen to us but we thought that you will listen to Sid.

If you will marry some so, it will happen with my permission. Ranbir is taking revenge on me because she did not let his marriage with Prachi and now, he washed your brain and said you to become a”Selfish”. You think that if you will come here so, I will forgive you, accept you, and will give permission to live in my house so, maybe it’s your misunderstanding.

I will not accept you and never. Pallavi says that she is trying to take revenge. Sid says that please don’t blame them and give us one chance to prove ourselves. Pallavi asks them to leave from here and also, take Ranbir, Prachi, and your wife from this house.

On the other side, Vikram’s health is going worse as he got a heart attack. Suddenly, Rhea removes her ghunghat and Pallavi gets surprised and says “Rhea”.

Gautam says that he is going to meet his new girl and leave the spot. Now, the episode will come with some interesting things. Will Gautam get success in his bad plans? Watch the latest episode on ZeeTv at 9 PM. Also, watch the videos on our Official DekhNews Youtube channel.