“Kumkum Bhgaya” today’s show the episode begins with the Taai Ji who tells Abhi that Riya locks herself in a room. Abhi asks what happening here and tell them to tell everything to me. Alia said that what he said only I know. Abhi said that he recently talk with Vikaram and Pallwai. Alia said that you are late to talk to him and tells him that Riya is like a dead body. Abhi says her be calm. Dadi said that confirm anything happens you may go now and look at what happing there. Alia said that she tries to talk to her and before doing something she tells her to go outside. 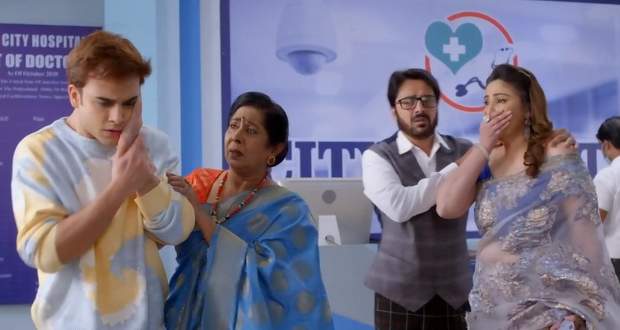 Prachi scolds the Ranvbir to talking about death and asks that did you purpose me like this. She tells him to purpose me and tell everything. Ranbir asks why are you afraid of me and says to listen. He said this is my heart Prachi said you are getting tremble and give the cold drink order. She said that you send the water outside the restaurant and tells there is not even water. He said that drinks are here but you don’t have a drink.

Prachi again said you in a tremble and ask from him did you tell your family about this romantic date. He plays the guitar and then purposes. Ranbir says that he doesn’t tell anyone. Prachi says if anything happens with us? Ranbir said yes I have to tell to my family and give her the promise that next time he definitely tell his family. Sahana listens to his words and thinks that boys also get tremble. Prachi tells me that I have trust in you. Ranbir says finally… and says thanks to God. Sahana thinks he is so innocent and they both look too good with each other.

Riya could take kerosene oil in her room. She thinks no one loves her, then she still alive. Abhi comes there and starts knocking on the room door and also shouting at Riya to open the door. Then Alia also comes there and said to her to open the door. Abhi tries to make her understand and said that he loves so much and everyone loves her. Abhi asks what she doing then tries to see inside the room with a window. Riya keeps the kerosene can. Abhi said do not do this and say that he loves her so much. For more latest written episodes stay connect with us and keep follow our website.