The beauty of the movie Kabir Singh, Kiara Advani recently shared a throwback picture of herself on her official Instagram account where she can be seen swimming under the ocean when she went for the vacations. With her adorable picture, many fans attracted to the actress’s beauty on social media and also, dropped too many compliments on her comment section. Along with the picture, Kiara Advani wrote,” You can not stop the waves but you can learn to swim” and also, clarified that the shared picture is a throwback. 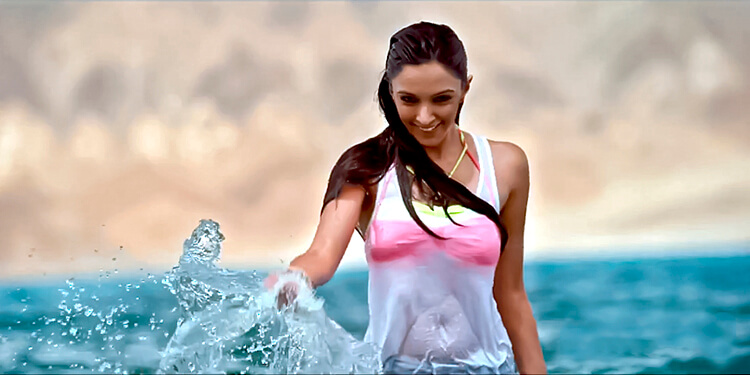 In the picture, Kiara showed an adorable pose under the water and wearing a neon blue bikini. Maybe, the picture was taken when she moved to the Maldives with her rumoring boyfriend Sidharth Malhotra to celebrate the day of New Year. Well, the news is also coming that both will be seen with their upcoming drama movie “Shershaah”. In the interview, the interviewer asked the actor about the rumors between Kiara and Sidharth and Kiara denied giving the answer to his question. Instead of an actress, the actor told that clearly about their vacation that they went together.

Kiara also said that she knows about Sid during the shoot of their upcoming movie Shershaah. He is an intelligent and hardworking man who has lots of talent and work focus when it comes to doing some work”.

In another interview, when Sidharth appeared with producer Karan in Koffee With Karan, Sidharth Malhotra denied accepting that he is in a relationship with Kiara and cleared that he was happy to work with her. Later, he added that I don’t about the rumors and many rumors are surrounding everywhere.

Just a few hours ago, Kiara shared the moments of the loss of Bollywood producer Ryan Stephen who died due to Covid-19 complications on May 29. Well, the actress appeared in some popular movies with some known faces like Akshay Kumar in Laxmmi, Shahid Kapoor in Kabir Singh. Now, she will appear in “Bhool Bhulaiyya 2” with Bollywood face Kartik Aryan. Along with this, she will be seen in another movie “Shershaah”. The actress has captured lots of attention through her bikini picture. But, this is not the first time, the actress has already shared many pictures of herself that have become a point of debate.