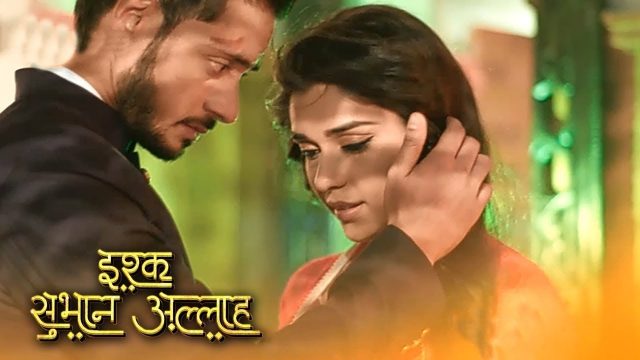 Imran and Reema bring Kabir and Zara to resort. Kabir and Zara sit in their room. Its all decorated for their night. Imran says to Kabir that you might need almond milk. Kabir says you think so? Zara blushes. Imran asks how are our decorations? Kabir says its very cheap, useless and less thoughtful. Zara says he is joking, it is all very nice, thank you all, we will pray that you both get married. Imran says together? Zara says my friend is cute, Kabir says my friend is nice too. The manager comes there, he says we have a special room for Reema and Imran too. They blush, Kabir teases to give them almond milk too, Reema asks for another room but the manager says all rooms are booked. Kabir and Zara send them away. Kabir hugs Zara. Imran and Reema come to their room, he lies on the bed.
Reema asks him to sleep on a couch, he says come on the bed, I will sleep like a nice kid. Kabir says to Zara that I am going for a bath, Zara says I want to go first. Kabir says I have been waiting, I will go first Zara takes his shirt from him and says no go. Kabir runs behind her, Zara locks herself in the bathroom. Kabir laughs.

Imran says to Reema that you don’t trust me? why hero have to sleep on the couch? Reema says no, Kabir slept on the couch since their wedding, we are a witness.. what if it happens tonight too? Imran says it won’t happen. Imran goes to sleep on the couch.
Kabir is shirtless, Zara is wearing his shirt. Kabir pulls Zara closer and kisses her head. Hum tum plays, Kabir pins her to a wall and is about to kiss her but Zara runs away. Kabir grabs her and hugs her from behind, Zara turns and looks into his eyes, they both romances each other. Kabir runs behind her and leans into her, they are wrapped in sheets and enjoying their time together.

Zara lovingly looks at him and says duty or love? Kabir says I never forgot my duty but I want to confess that I love you, Zara. She says what? Kabir says I love you unconditionally, I love you so much, he kisses her eyes then her cheeks, Zara closed her eyes savouring the moment, Kabir leans in to kiss her lips but Zara puts the balloon between them, Kabir blows it away and is about to kiss her but she stops him. Kabir asks what happened?