Here we are going to share a written update of the latest episode, this show is running with good TRP on television. According to the promo videos, the show is going to be very interesting and entertaining. The episode starts with Imlie saying she is like her mother then why she behaved in the wrong manner with her, how will she talk to her, and sorry to her. Imlie cries and Aryan comes saying she just has to say that she behaved rudely with Meethi and took out the anger on her that she had for Aryan. Imlie says she is missing her mother quickly. Imlie calls in the post office and hears Meethi’s voice. She doesn’t notice Meethi is standing near to her. 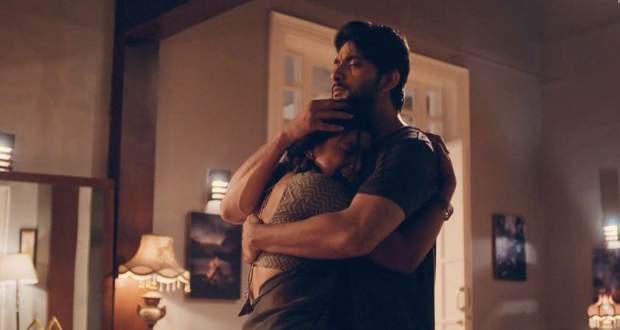 She says Meethi should scold her and treat her her way and asks her she can do anything that she wants. Meethi says she just wants to stop Imlie to do anything wrong. Meethi says Arayan is good and she keeps a hand on her, Imlie gets happy and hugs her. She says that Imlie and Aryan are made for each other. Arpita brings out her colorful jewels and clothes saying after Arvind’s death her life became colorless and she doesn’t want this marriage now. Imlie makes her understand and says that she also deserves good and happiness.

There Nila tells Nanda that the latter thinks like her. She offers her some money and asks her to step back to the wedding. Nanda tells Arpita that she is ready to give her consent for the marriage. All gets shocked to know that. Nanda becomes greedy and says she is in favor of widow marriage. you will see that Aryan and Imlie will spend some time with each other.

They got out hearing a noise and someone says a person came by covering her face and left. Aryan thinks that the person might be someone from the decorators’ team. Nanda gives the largest list to fulfill the demands for her daughter’s happiness. Nila too says Narmada should think that Sundar can fulfill Arpit’s needs with his less salary. Meethi says to Narmada that this is illegal and she should not fall into the trap.

Nila taunts her by saying she taught Imlie to trap rich men and that she should keep quiet. Meethi angrily says she should not talk wrong about Imlie. Nila tries to slap her and Imlie stops her. Imlie says she is controlling because Meethi taught her not to misbehave with elders.