Imlie Spoiler Written Latest Update 4th June 2022: Here we are back with the written update of the very famous show, Imlie. This show is running with the good TRP on television. According to the promo video, the show will be exciting and entertaining. The latest episode starts with Imlie calling Mirchi and asking her to call her Amma. Aryan says instead of Mirchi and Imlie asks him not to do that. Mirchi sits on Imlie’s shoulder and says Arayn to hold it but he gets nervous and Imlie laughs at him. Aran gets a message from Jyoti. 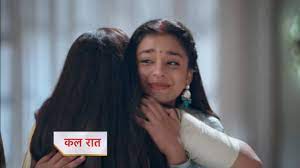 She says that she went to the same chemist shop where Madahav brought the medicine for Imlie and she learned from CCTV footage that the pills were sleeping pills. Jyoti says him that it means Madhav might have done wrong with Imlie during the sting operation because Aryan can’t be a father and Imlie is pregnant. Aryan says to Jyoti that he can’t believe this. He doesn’t want to take any wrong step in hurry against Madhav, it can destroy Aryan’s relationship with Imlie. Imlie Spoiler Written Latest Update 4th June 2022

Aryan leaves and Jyoti says he is not like other husbands. But she believes she will succeed in her plan. Imlie eats food with Mirchi Aryan says she can be infected she says nothing will happen Mirchi is like our family. Aryan says sometimes we think others are our family members but they don’t deserve our love and faith. Imlie asks what happened, and Aryan says it’s just worked load. She says she wants to go to the office with him for the employee appreciation day.

She says that Madhav’s workload will be lesser too. Aryan says no but she insists and goes to the office. Aryan gives the ward to the employee and says thanks for their contribution. Imlie says she wants to thank someone special. Jyoti thinks she will talk about Madhav and things will be easier for her but Imlie takes the name of the Coffee machine and says that it really helped in the work. Aryan gives awards to all the employees, who did good work and including Imlie for their great performances.

Aryan doesn’t take Mdhav’s name for once Imlie feels bad for Madhav. Jyoti says she should talk to him. IMlie goes behind him. Gudiya sees the idea to throw out the daughter Inlaw, NiLA says she already uses this idea on Imlie. Sundar and Arpita come and Arpita says to Nila that Imlie is younger than her and scolds both of them. Imlie looked for Madhav and Nila Gudiya arrived at the office. Gudiya takes out a wheel of a chair so that Imlie bumps into that and falls down.

Nila says now Aryan will not allow Imlie to come office. Imlie gives her own awards to Madhav and says that Aryan has not seen his hard work but she is the witness of his hard work. He denies the award. He falls down. Aryan sees this and Jyoti proves him. Aryan gets furious at him. Imlie gets shocked to see him like this.