The episode starts with Tripathi family ladies are getting ready for Savitri Pooja. Nidhi says Malini you are glowing, which lotion do you use. Aparna says that this glow is of her husband’s love. There is an old story that Savitri fought with Yamraj for her husband’s life. Malini says how you described this story so easily. Imlie overhears this story and thinks about when she saved Aditya. Nidhi asks Imlie that what can she do for her husband. Imlie says she can bear a bullet for him. She says that she will pull the tail of Yamraj’s buffalo. Everyone laughs at her answer. Imlie sees the bundle of thread and asks what is its use. 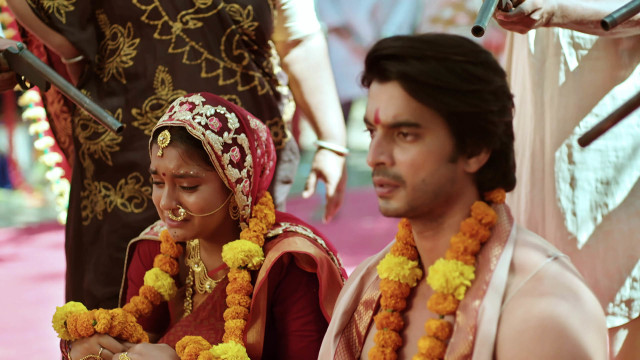 Taiji says that during Pooja they will tie it around the tree and will pray for the long life of their husband. Imlie says she need this thread. Aparna says that you are not married so what will you do with it. Nidhi suggested her to keep a fast of Saula Somwar. Taiji allows Imlie to take a bundle of thread for the future. Anu has brought some gifts for the Tripathi family and she named everyone’s gift. Dadi says that she forgot a gift for Imlie and Aditya. Anu gets angry and fights with Dev. Daadi says that you shouldn’t interfere between husband and wife. Daadi says that she will bring gifts for them. Rupal is upset and missing her ex-husband.

Imlie comes to Rupal and treats her Pakkoda that she has made. She asks her to get ready and wear a beautiful dress so they can click pictures. After sometime Dadi, Dev, and Anu come to Tripathi’s house. Anu gives everyone a gift and says that she doesn’t know Imlie’s size so she drycleaned Malini’s old designer dress for Imlie. Dev gets angry but Daasi asks her not to create a scene here. Aditya comes and says that our family knows which kind of clothes Imlie wears so they will buy for her. Dev calls servants and asks him to throw that dress. Imlie says that she will wear this dress as this is of Malini’s. Imlie goes to the kitchen. Dev knows that she must be sad and he gives chocolates to Imlie.

Malini sees this and thinks why her father didn’t give chocolates in front of the family. She thinks might be he doesn’t want to create any drama. Now Tripathi’s family ladies perform aarti for their husbands. Daadi guides them and says to take 12 rounds of the tree and then touch their husband’s feet to take blessings. Imlie is also doing this pooja at home in front of a tree by looking at Aditya’s photo. Imlie is happy as she has done this pooja without any interruption and also fulfilled her mother’s wish. Ladies return home and Imlie hides her pooja stuff. Anu sees that Imlie has filled sindoor in her hairline. She asks her whose named sindoor is it. Stay connected to know more about this episode.