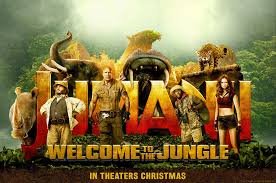 Jumanji: Welcome To The Jungle, latest Hollywood movie released on 20 December 2017. The movie is the sequel to the first film Jumanji which was released 21 years ago, based on action, comedy genre. It is also a tribute to Robin Williams, the star of the original part. The movie is directed by Jake Kasdan and produced by Matt Tolmach, William Teitler. The star cast of the movie is as follows.

The older JUMANJI deals with the magical powers of the game in the wooden box.  Running time for the movie is 1 hour 49 minutes. Based on Action/ Fantasy genre. In the old movie, The kids have to follow the tasks given by the game as per their turns but In this part extending that story, four  teenage boys get the board game of Jumanji and that game suddenly converts into video game, four young boys play video game and ultimately gets captured in the game and comes in the roles, same as chosen outside. They have to now win the game otherwise they will get captured in the game for their entire life. IMDb gave it 7.2 ratings out of 10. Rotten tomatoes gave it 78%. Moving on to the Indian audience, they just loved it and critics also praised the movie. The audience said great story plot, adventurous, mind-blowing movie, full of entertainment. The movie collected 28.96 crores in India and still on the run to collect .

The movie is all set to make records. It collected huge amount of $514 millions worldwide.

It attained top spot in Australia and collected $4.5 millions.