F35 Crash Video, British Fighter Jet Falling Into Sea Viral Video Leaked! Today, we got an unfortunate incident that happened to a British F-35 stealth jet has been dropped off on a launch ramp. The plane was crashed from the launch ramp on the UK’s flagship aircraft carrier. The incident has been captured on CCTV and it went viral on social media platforms. The video clearly shows that the plane is just moving forward to take flight but it does not go above and it fell down in the river. The sources stated that it seems a plastic cover such as a rain cover that sucked into the engine of the aircraft. 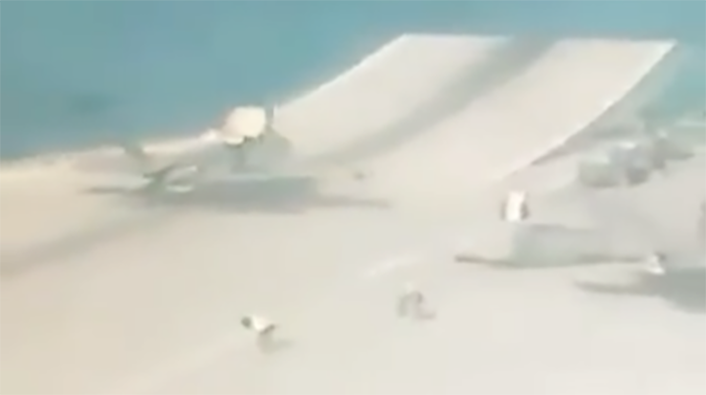 This is the main reason it falls and fails to take off. We can clearly see in the video that the plane is moving very slow to take off which makes it totally unable to fly and it fell down in the river. Not only this but before the jet fell from the ramp, the pilot decided to eject to safety. Now, the video is constantly doing rounds on the internet and many people have already seen the full video in which a craft falls down the ramp instead of taking off.

Let us tell you that Commander Tom Sharpe who is a former Royal Navy Officer said “Given how close the aircraft ditched to the bow, and the speed of the ship on launch, the likelihood of it hitting the bow of the ship (under the waterline) would be quite high”. As we can see that the aircraft is not damaged or bad but still it can’t take off and fell down from the ramp. For now, it is not yet known whether the aircraft impacted the carrier, if this were the case the carrier would have had minimal impact on the 65,000-ton ship, much like a fly hitting windscreen.

The video clearly shows that the aircraft is going to take off but it is going very slow that giving a hint that the engine has sucked a plastic cover and it can’t take off properly. The video of the incident went viral on social media and many people continuously shared the video. There are some official statements hadn’t arrived yet but we will update all the information related to the incident that appeared in the video. We will provide all the information related to this incident in the future as well.