After nearly a month in the national capital, Delhi, many of the liquor shops opened on Monday. About 150 shops have been allowed to open after the lockdown rules were relaxed. These shops were allowed to be open from 9 am to 6:30 pm. Sadly, they had to be closed due to uncontrolled crowds and non-adherence to social distance. Even police also had to use mild force to disperse the crowd at many places. It is worth noting that Delhi is one such state whose most of the areas come under red zone and still giving these relaxation is hard to digest.

People in Delhi gathered outside the shops even before they opened. In most areas in Delhi, hundreds of people are seen lined up outside the government authorised liquor shops. According to one official, many people were not even aware that only government shops were allowed to sell liquor. A large number of people gathered outside shops in Burari, Mayur Vihar, Gandhi Vihar, Rohini and Janakpuri. The official said that a shop near Mayur Vihar in East Delhi had to be closed as people were not following the social distance law there. 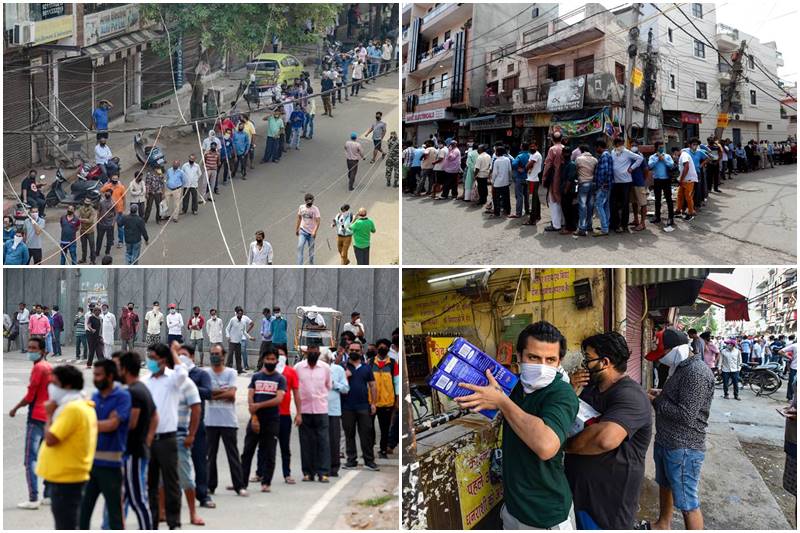 Note that a large part of the revenue of the state government comes from the sale of liquor, in such a long time there was a demand that these shops be opened. Delhi is still in the red zone but despite that, the state governments have announced some relaxation. During this time, in addition to the shops of need, there is also the allowance to open all types of one-off shops in the street. Private offices have also been opened in Delhi, where 33 percent of the staff will be present.

The Union Health Minister Harsh Vardhan on Monday reacted to the action taken by the Kejriwal government of opening liquor shops in the state. He said, “Delhi is one of the places where considering the current status, more stringent action needs to be taken. I think that minimum relaxations should be given by Delhi government amid coronavirus lockdown to curb the spread of coronavirus.”

At the same time, Delhi’s Regional BJP leader has expressed its opposition to the opening of liquor shops in Delhi. He believes that this decision of the Delhi Government will spread the corona pandemic more rapidly. He also argued that opening liquor shops would increase crime in Delhi. Assembly Leader of Opposition Ramvir Singh Bidhuri has written a letter to the ruling Aam Aadmi Party government in Delhi, demanding that in this time, attention should be given on the correct distribution of ration and providing food to the poor, and not to open liquor shops.