Hello everyone, we are again bringing a written update of 9th July 2021 of the most prominent and successful television show named Choti Sardarni. From the beginning, the level of drama is touching the peak and collecting lots of love from the audience. Not only this but the TRP of the show always going on top and the serial remains in the first position in the TRP chart. The story always showing many brilliant and amazing moments to all the viewers who love to watch the exceptional episode of the show. The upcoming episode of the show also coming with lots of enthralling and entertaining moments. 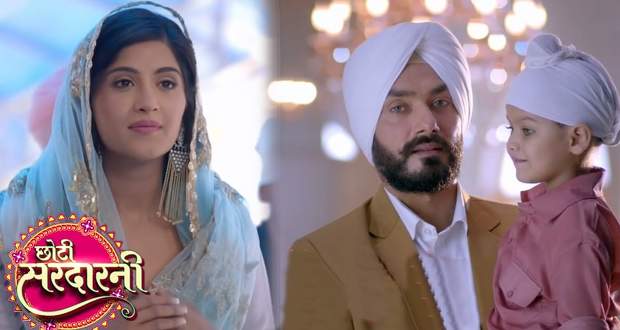 Already, the previous episode shows high voltage drama in which Kulwant is trying to turn Karan and Param against each other. Not only this, but she also creates hatred in the minds and hearts of both children for their parents. Somewhere how, she has also got success in her plan.

Just because of hate Param punches Karan and broke his tooth and Sarab slaps him in anger. In the next scene, viewers will see that Karan calls Kulwant and tells everything to her that Param broke his tooth in his anger. After hearing this, Kulwant gets happy.

She says him that don’t worry as she will be sending a new plan to him. On the other and, Meher also get shocked after hearing about all the incident that happened in the house. She starts keeping her eyes on their locations. On the other hand, Sarab asks to take CCTV footage of the servants’ rooms as they have to find out on whose orders Geeta did all this.

Kulwant tells about the next plan to Param and Geeta goes to meet Kulwant. After watching the CCTV footage of Geeta’s room, Sarab and Meher are stunned as they see that Geeta wore a dress as Tai Ji wears.

While Kulwant talking to Geeta, she sees the watch in her hand and asks her if she stole it. Geeta tells that the watch is given by Meher and after that, they both start laughing. Suddenly, Yuvi comes there and asks Kulwant to run as the police are coming here. Before they all understand the situation, two constables come and arrest Geeta.

She gets scared and says that she did not do anything even Kulwant asks the police officers on what behave you arresting Geeta. So, the upcoming episode of Choti Sardarni will be going to hit the highest TRP, and millions of people are eager to watch it. So, stay connected with us to know more updates.