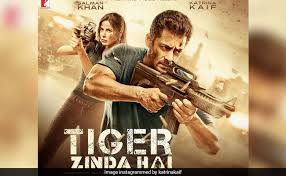 A great comparison when it comes to EK THA TIGER and TIGER ZINDA HAI. HUH? isn’t it? Ek Tha Tiger which was released in 2012 was a romantic, action thriller, directed by Kabir Khan. Star cast included Salman Khan, Katrina Kaif, Girish Karnad, Ranveer Shorey. It was loved by all and hit the screens hard. It was a joint production of Yash Raj FILMS And Kabir Khan. A spy named TIGER, One of the best agents of the RAW, INDIA. He has been sent on a mission and there he meets Zoya, agent of ISI, Pakistan. They both fall in love and story proceeds. Critics gave it good reviews and praised its action scenes. Ek Tha Tiger was so powerful so as it became second Indian film to cross 3 billion crores worldwide. It got 4.5 IMDb ratings and 3.5 stars from Times Of India.

Tiger Zinda Hai released on 22 Dec 2017, was the most awaited film of the Salman Khan as everybody was amazed by Ek Tha Tiger and eagerly waiting for the next part. We could seriously estimate the excitement among the fans by looking at the pre-booking of the seats in the theatres. It was humongous and all ready to shake the box office collection records.

If we start comparing then it will be the data

Ek Tha Tiger had small budget of 75 crores as compared to Tiger Zinda Hai with budget of 150 crores, but still Ek Tha Tiger had proved out to be a blockbuster and it became fastest movie to cross 100 crore club. We can see in the comparison that opening day of both the movies were approximately same. But after the opening day the box office collection of Ek Tha Tiger decreased but collection of Tiger Zinda Hai kept on increasing and is ready to set new records. Till now the movie Tiger Zinda Hai has collected 300.6 crores and became the 6th movie which has crossed 300 crore club in India.