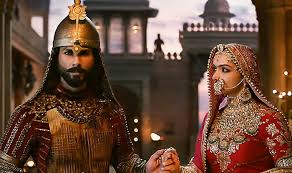 Padmavati, now renamed as Padmaavat due to various issues and riots waked up in the Rajasthan, Madhya Pradesh, Gujarat. This is the movie depicting the history of Rani Padmavati, who was the second wife of the king of Mewar, Rana Ratan Singh. The storyline is based on the poem PADMAVAT written by Malik Muhammad Jayasi. Padmavati was so beautiful that she was admired in the whole territory. Rawal Ratan Singh was obviously so possessive about her wife and loved her so much. The movie is directed by Sanjay Leela Bhansali. He is famous for making finest movies.

We can see Deepika Padukone, Ranveer Singh,  Shahid Kapoor, Aditi Rao Hydari as playing lead roles in the movie. Deepika is seen as Padmavati, the main character of the movie and Shahid Kapoor as Ratan Singh, Ranveer Singh is doing his first negative role as Alauddin Khilji. This is the third collaboration of Sanjay Leela Bhansali, Deepika Padukone, and Ranveer Singh. They did Ramleela, Bajirao Mastani and now Padmaavat. Earlier 2 were super hit and left their shadows behind. Padmavati is a unique picture and helps us to learn about the history. It is the most expensive movie with the budget of approx 200 crores rupees. The movie is also to release in 3D and IMAX 3D.

Songs are good from the movie. Ghumar song was one of the main reason why people were angry but the dance of Deepika was fabulous. The movie was first scheduled to release on 1 Dec 2017 but got delayed due to riots and case was there. Now Supreme Court has been ordered to take back the ban from the movie and allowed Padmaavat to release after some cuts and change of the name. Now the releasing date of the movie is 25 January 2018. Fans are seriously excited to see the shows and advance bookings of the movie have been started. Gujarat and Rajasthan denied to remove ban from the movie even after the SC orders. This will surely affect the box office collection of the movie. It needs to cross 200 crores to become a successful movie. after seeing the craze among audience it is clear that movie will do the geat business