Recently Saif Ali Khan came with his latest movie Kaalakandi which released on 12 January. Kaalakadi is a black comedy directed by Akshat Verma. It is like other black comedy movies Delhi Belly, Newton. The movie is starring Saif Ali Khan and Sobhita Dhulipala. IMDb gave it 7.2 ratings out of 10. 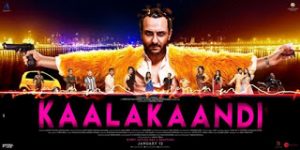 There are supporting actors also- Akshay Oberoi, Isha Talwar, Kunal Roy Kapur. Saif Ali Khan came with his last movies- RANGOON, PHANTOM which did not work out for him so expectations from this movie are high. Last movie Chef of Saif was a flop and audience did not like that too much. Well !!! this time despite seeing competition with Salman’s Tiger Zinda Hai, Vikram Bhatt’s 1921 and Anurag Kashyap’s Mukkabaaz, Kaalakandi did good business and successfully collected 1.25 crores on its opening day. Trailer of the movie was so exciting and that did its job and attracted the audience. However, songs of the movie are not so popular. Aamir Khan liked the movie and praised it on the screening of the movie. But the critics did not give good reviews. The audience also gave mixed reviews, some people says it is good comedy film and some felt it boring.

WELL! the movie Kaalakandi is doing better than Msukkabaaz and 1921. 1921 is also running low on screens. We can say Saif is moving slowly in the run to be hit.