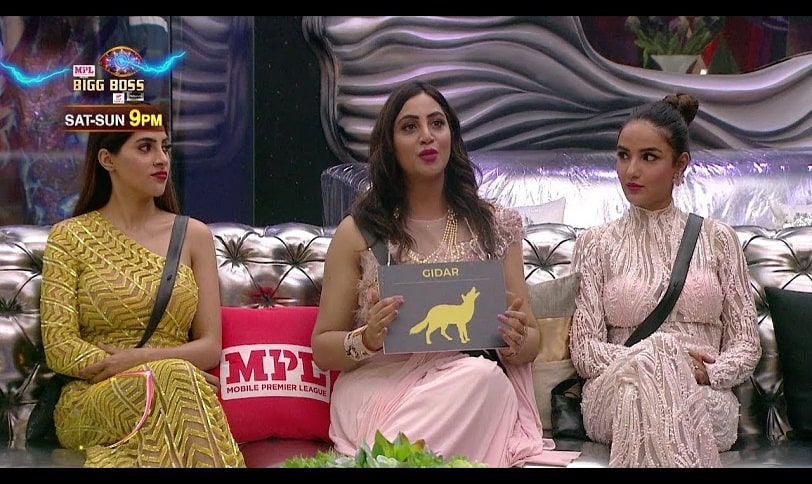 In Today’s Episode, Abhinav Shukla denies To Kavita Kaushik, He Said I Would Love to see Those Massage and If you can Prove that is it Voilant Messages, Kavita Kaushik also Said Then Tell me Why Our Friendship has been Broked?, Abhinav Shukla Said I Don’t Care About it and This Was Good Time When Our Friendship has been Broken, I Thank God, Rubina Dilaik Emotionlly Broke Down, As we know She is Very Strong Lady She Never’s Cries without Reasons But This is Hearth Melting for her, Rubina Dilaik Still Stand with Abhinav Shukla, And Jasmin and Vikas Gupta Consoled Rubina Dilaik.

Bigg Boss Give a Task to the Housemates, They Have to Choose One Tag Which is Suitable for Contestants according to Tagline

Homemates have to give animal tag challengers

Salman Khan Interacting With Housemates And Talking about animal tag challenges, Salman Khan Said Did you Satisfied with Their Tags, Most of the Contestants denies, Vikas Gupta Explain the Scenario of the Animal Challange Because Housemates Give him Snake Tag and he is Unhappy with and Vikas Claimed Manu Deserve Snake Tag.

After This Salman Khan Discussed Week Task Eijaz Khan and Manu Punjabi, Why You Want to Lose the Task and Why you Want to Save Kashmera Shah, Eijaz Khan Explain the Things and Salman Khan Warns Him Don’t Do that Again Otherwise You will Make Trouble for himself, Salman Khan Said If You want to Lose the Task Then Why Would You become More Aggressive, Is it Drama from Your side? Eijaz Khan Said he loves to do the task and he loves Aggregation and it was not Drama, Salman Khan also Talk with Rubina Dilaik and Abhinav Shukla About The Task, It’s Seems Like Sabzi Mandi and All the Contestants Talking at the Same time Salman Khan Become Angrier.

Arshi Khan Blaming On Salman Khan That Salman Khan Always Insulted Her Since her Bigg Boss Season and Salman Khan Slammed Arshi Khan Badly, and Explain Her he didn’t Insult her It’s Just a Jock and If you think Is this Insulted then I Will Not Talk with You, After Some time Salman Khan Light The Mood of housemates With Funny Talks.