Bigg Boss 14 Coming To Reached On the First Weekend After Challengers Entries But Before Weekend In Today’s Episode Bigg Boss Makers Drop Another Entertainment Package In The Form of Rakhi Sawant, Nikki Tomboli, Aly Goni, All the Entries In Bigg Boss House In Today’s Episode Rakhi Sawant Finished her Quarantined Period and All Set Ready to Entertain India Once Again, The Most Entertaining Girl Ready With all her Weapons To Entertain Audience along With Her Nikki Tomboli and Aly Goni Evicted Contestants Back In The House, If we Talking about Bigg Boss 14 TRP then It’s Growing Day By Day, According to Last TRP Reports Bigg Boss 14 Weekend Rating Was 1.5 and Weekdays on 1.1, And Now Bigg Boss 14 TRP of Last week 1.7 Weekend and 1.3 On Week Days. 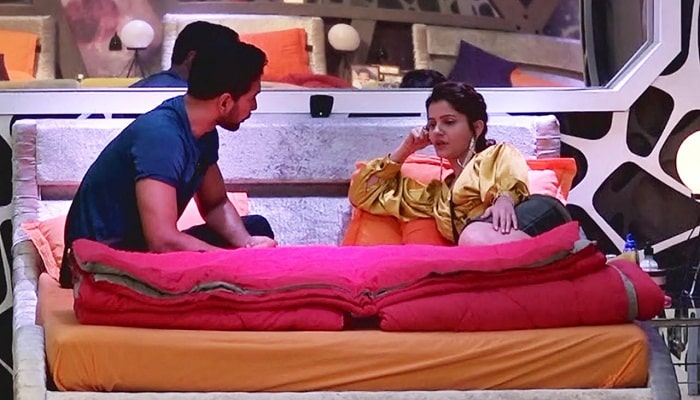 Rakhi Sawant And Nikki Tomboli Entered In The House Via BB Male, Bigg Boss Design Big Gift Box Inside the BB Mall and Inside the Boss Nikki Tomboli Setting From Next Day Rakhi Sawant Entered So Everyone Become More Happy and Shocked at the Same time, Rakhi Sawant Seems Very Excited and She Said I Ready To Rock, Vikas Gupta You are My Brother and Nobody can Touch You In My Presence, Rakhi Sawant Taunting Arshi Khan, and Wait and Watch, On the Other Hand, Nikki Seems with Little Low Energy but She Looking absolutely Beautiful.

Recreation of one of #SidNaaz scene to be seen Today’s episode. Sidharth Shukla’s re-entry happened through the confession room where Shehnaz was called inside. This time Rakhi tells Jasmin that she has to go to the confession room and from there Aly Goni Waiting. Both Become Emotional, Jasmin Cried a lot In Confession Room, After Some Time Both are Talking with Each Other and Aly Goni Upset With Jasmin Because of her Behavior with Vikas Gupta, Aly Goni Said to Jasmine ‘You already Know how’s he was doing with you outside and now you treated him like you are friends.

Aly Goni also Expose Eijaz Khan In Front of Rubina Dilaik, Jasmin Basin, Abhinav Shukla, Aly Said He Is the Most Negative and Fake Person In the house, Eijaz Khan was Said to Vikas Gupta, Abhinav, and Rubina Dilaik Not Deserve to be in the House, But he also Said Abhinav That’s If He Choose Winner of the Show Expect from him then he Choose to Rubina Dilaik, He used to Praised Rubina Dilaik But Suddenly he Flipped Things, Aly Goni also said He Just Bitching About Rubina, Abhinav and Jasmin all the time, and yesterday Task he Becomes Cry baby.

Vikas Gupta Shares Abhinav Shukla About Kavita Kaushik Matter, Vikas Said Kavita and her Husband Claimed Abhinav Used to Call Her While he was Drunked and Abhinav is a Drunk addicted, Abhinav Shukla, Shares all the Things to Rubina Dilaik, and Said How Can People’s can down that level, Rubina Dilaik Said I will Handle Her and asked Abhinav Shukla did he have all the massages, Abhinav Said absolutely Yes, Then After the Bigg Boss I Will Call her Firstly After Finish Bigg Boss 14.