Here we are back with the latest update of Anupama. This serial is very famous and popular among people. This serial is going well with Great TRP on the television. This serial is very interesting and entertaining. According to the promo video, This episode starts with GK trying to hide Hasmuk’s health report. He says no one should find the report at any cost. Gk hides in the cupboard. Malvika tells Devika that if she gets a chance to keep her hands on Vanraj then she would have crushed him in the mixture. 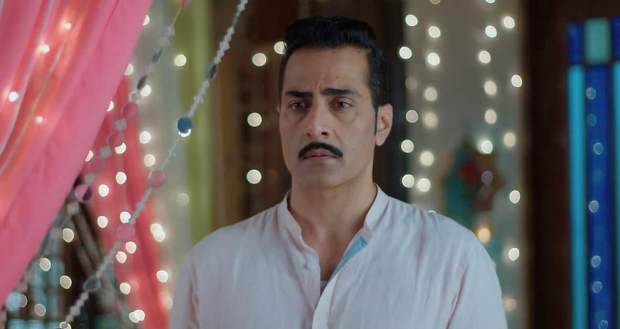 She thanks Devika to help her in grinding the Mehendi. Malvika tells Devika that she brought gifts for Shah but she will give them hiding from Anuj. Malvika takes the gift and Hasmuk’s report falls in one of the bags too. Shah’s gets decorated according to the purple theme for Anupama’s mehndi and sangeet. Kavya says she will put the Mehendi too. She asks Rakhi if she will not put Mehndi. Rakhi says that she has come here to just enjoy. Pakhi praises Kanta. Kanta says after all she is the bride’s mother. Gk asks Hasmuk that has he taken his medicines or not. Hasmuk Says he can not forget medicines.

He asks GK if the reports are saved. Vanraj finds Anuj. Anuj and Anupama get smitten seeing each other. Vanraj about to talk with Anuj. Anuj leaves from there. Shah praises Anupama and Anuj. Devika tells MaAn that Samar, Paritosh, and Pakhi have prepared the Mehendi with their own hands.

Anuj thanks them. Anupama looks for Kinjal. Paritosh tell that Kinjal is not good and will join them later. Shah asks to start the ritual. Anuj finds Vanraj gazing at him. Leela is about to see Hasmuk’s report but Rakhi interrupts. Rakhi says Leela despite being angry about why she is attending the functions. Leela escapes Rakhi. Anupama goes to Kavya and says thanks to Kavya for being happy in her functions.

Kavya thanks Anupama for giving her the reason for being happy. She says in her wedding she too took part and supported her well. Leela claps sarcastically seeing Anupama and Kavya’s friendship. Kavya asks Leela to attend the functions happily too. GK gifts Anuj’s mother bangles to Anupama. Anupama gets emotional.Later, Bollywood singer Mika makes an entry into shah’s house.
Mika gets happy meeting Shah. Anuj promotes Mika’s upcoming show ‘Savyamvar Mika Di Voti”. Anupama gifts Radhakrishna’s frame to Mika so that he can find a bride for him. The episode ends here, so don’t forget to watch the full episode of Anupama on the star plus channel on the television. Stay tuned for more updates.