Here we are back with the latest update of Anupma. This serial is very famous and popular among people. This serial is going well with Great TRP on the television. This serial is very interesting and entertaining. According to the promo video, this episode starts with Shah welcoming Anuj, Kanta, GK, Malvika, and Dolly. Kinjal, Samar, Paritosh, and Pakhi perform dance along with them. Anupama fells happy thinking Anuj hs reached finally. Kavya feels jealous and says Anupama’s engagement is happening and everyone was sad about her wedding. Leela says second marriage must be done silently but Anupama is shameless. Kanta beats the drum seeing Leela. Anupama thinks she can’t wait to see Anuj. 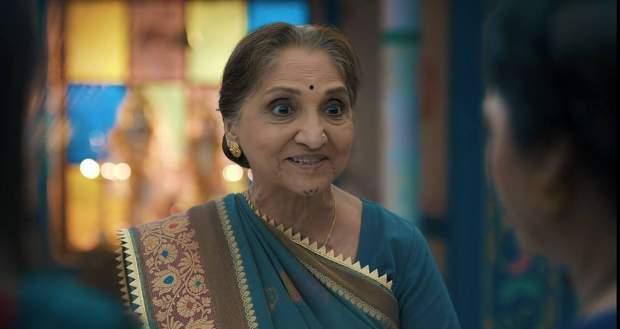 Leela taunts Kanta over beating the drum. She says her leg is broken still she is beating a drum. Kanta gives a befitting reply to Leela. Sanjay greets Leela. Rakhi asks Sanjay why he is siding with Anuj. Sanjay says he is also Anupama’s brother. Hasmuk welcomes all. GK asks Hasmuk if he has taken his medicine or not.  Hasmuk starts assureument GK. Rakhi says to Vanraj that his father loves everyone apart from him. Vanraj gets shocked and stands. Anupama waits for everyone to call her because she gets more restless. She is thinking Anuj might be looking handsome. She wants to see him.

She wishes everything goes perfectly. Anuj seeks Leela’s blessing. Leela doesn’t respond. Anuj says to Leela that one day she will bless him. He further hugs Vanraj and says him to stop playing mind games with Anupama otherwise he will not spare him. Rakhi says to Vanraj that she has listened to Anuj’s conversation. Vanraj stands mum. Anuj meets Anupama. He says to her that he will take her to the ceremony. Anupama blushes. Anuj and Anupama get smitten seeing each other.

Rakhi says why Anuj and Anupama are taking the time to come. Kanta, Devika, Jignesh side Anuj, Anupama and asks Rakhi what is the problem she has if both are late. Rakhi says she doesn’t have any problem. Further, Leela waits for her mother. Jignesh gets shocks, Leela, by telling her that their mother is not going to come. He told Leela that when she was inviting their mother, he heard. Leela asks Jignesh what he did. Jignesh says their mom got disappointed with her as after ages she called to play games. Anuj and Anupama spend a romantic time with each other. Vanraj sees them. Both ignore Vanraj and walk away. Leela gets angry with Jignesh. Jignesh asks Leela not to hamper MaAn’s wedding or otherwise he will break his ties with her. Shah’s welcome Anuj, Anupama. Anuj, Anupama clap for each other. The episode ends here. Stay tuned for more updates.