As we know the show is very popular among people, it is running with great TRP on Television. Here we will share a full written update of the latest episode. According to the promo videos show is going to be very interesting and amazing. The episode starts with, Anuj and Anumapa Continuing to work till late at night at the office. Anu falls asleep on Sofa. 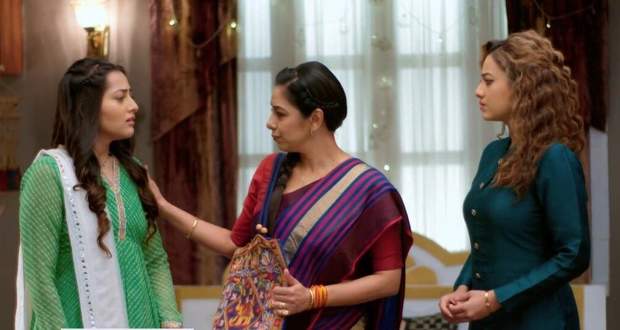 Anuj drapes his blazer around her and falls asleep on the other side of the sofa. Anu wakes up and drapes Jacket over Anu again, and falls asleep again snoring. The next morning, Malvika comes and wakes them up in her witty style, and she offers them fresh clothes, toothpaste. She asks Anu to prepare the sandwich. Malvika asks if Kavya came as it’s her first day of work. Malvika goes to cheak on Vanaj.

Vanraj gets ready for the office and asks Toshu if he is ready. Toshu tells he has a meeting with the architect so he will come later. Kavya gets into Anuj’s car says that they are going to the same place, so they should go together. He frowns. Baa asks Toshu to go with Vanraj will fight again if they go alone. Toshu says he doesn’t want to interfere.

While having breakfast, Malvika taunts Anu and Anuj when are they getting married. Anu feels nervous. Vanraj walks in she forgot that she has a meeting with Vanraj. Anu offers him breakfast but he refuses, but know can sense that he is hungry. He says if she can sense that he is hungry, so why can she not release that whom he likes his around. She is not a babysitter to think about him.

Kavya enters and takes Anu’s signature on HR documents. Vanraj gets jealous noticing that and tells Mukku that her Mumbai restaurant proposal is best and they should go ahead as Mumbai is the best from a business point of view. Malvika says she bounced this idea just like that and if he wants this, let’s do it. He says she is the final authority, and he says he has better experience than her. Anuj and Anu say both partners should take decisions together.

Anu and Anuj give advice for the Ahemdabad project not for Mumbai, Malvika shouts and says Anuj becomes a slave of his wife before marriage. Malvika says to Vanraj that they will discuss it in the next meeting. Malvika notices Vanraj’s venting out his anger on the laptop keyboard and questions him.

Vanraj says all are supporting kavya not him if she wants a divorce so everyone for him to give the divorce. He says he can’t tolerate Kavya in the house and now he has to face her in office too. Malvika says Kavya needed a job. Vanraj says Kavya did wrong things with him and with his family too.