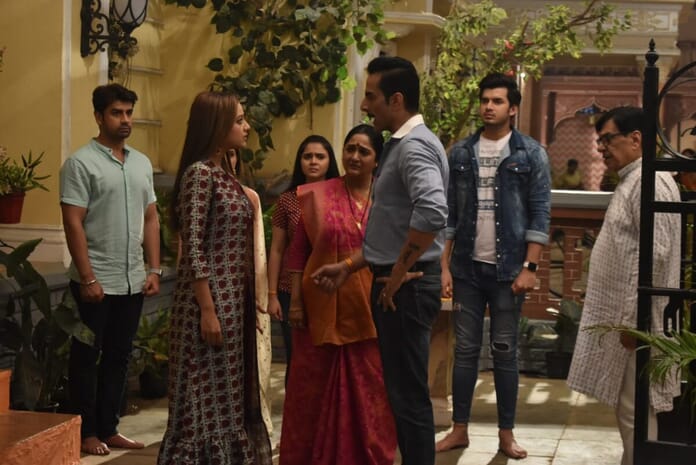 As we know that Kavya had become a daughter-in-law of the Anupama’s house and she left the house. Finally, the makers have released the promo videos of the serial and waiting to watch the next episode.

The upcoming episode starts when Kavya continuously rants about Vanraj and his family because they don’t want to accept her and Vanraj’s family members only chanting the name of Anu day and night. Later, Vanraj blames her for not being able to accept his family because of this, Kavya says to him that his family always tries to create drama without any reason.

She adds that his children and even his family did not accept her as their family member. Later, Kavya points out at Samar and calls her mumma boy and then, Toshu who also insults his own mother.

Anu asks her to not talk about the family here but Kavya asks her to shut her mouth. Kavya continuously drops fire on them with her words and everyone listen to her. She continuously says that Shah family doesn’t want to accept her as a family member and compares her to Anu always. She is a God of the house. She also says to Bapukji that he leaves the house when the drama is about to happen in the house and Baa, who always threatens her to slap her.

Vanraj keeps listening to her and he says to her that marrying is the biggest mistake of his life. Vanraj warns her to shut up her mouth and says to her that he will not take his step back from his responsibilities.

Vanraj says to her that they both will not live here and holds Kavya’s hand to leave but she says that she will not live in this house. She goes inside the room and brings the paper of the house. Vanraj reads the paper and reveals that the house belongs to Kavya.

Later, Kavya reveals that she took the help of Rakhi to get this house and made a fool of Anu, Vanraj, Baa and Dolly to get this house and fool them who did not even read the paper before signing out. Anu says to her that she did wrong with her family and Kavya says that no one in the house did right so, she is not the only one doing wrong.

Anu says that her family came into arguments but never cheated on anyone. She says that Vanraj cheated on his family and now, it is Kavya. Anupama says that if she begged Baa, Bapuji, and the kids to give this house to her, they did not even think about this and give to her. The Episode Ends.